Within the walls and in the immediate vicinity of the first urban settlement of Neapolis, and later expanded during the Roman era, numerous clues suggest the presence of various thermal plants, especially from the Imperial Age. The presence of such complexes, in addition to the obvious structures from the Greeks, was then expanded and modified by the Romans during their massive expansion into the southwest area of the city, where according to literary sources they built a hippodrome, gymnasiums, and a stadium (Strabone, V, 4, 7).

From the year 2 CE, an athletics contest was held in Naples every five years in honor of Augustus. Known as the Agoni, they were a renewal of Greek institutions in Neapolis (Dio Cassius, LV, 10, 9; Svetonio, Aug. 98, 6; Vellius Patercolo, II, 123, 1). Commonly referred to as Sebastà by the Neapolitan Agoni, the contests were probably not considered a new institution, but rather a revival of the competitions held in honor of the siren Partenope which dated back to the most ancient times of the city (Peterson, pp. 210 – 211). Numerous inscribed fragments found in Naples and elsewhere, and principally at Olympia provide many clues about the Sebastà. Similarly, the discovery of two marble torsos representing athletes near Castle Capuano would seem to confirm the hypothesis that there was a large concentration of Roman athletic buildings in this area of the city.

This high concentration of athletic structures in such a small space would also suggest the presence of numerous thermal complexes in this area as well. Considering the importance of the Sebastà, the thermal complexes would have been absolutely indispensable not only for training and preparation of physical or mental strength, but also as a place of meditation, restoration and rest.

The thermal buildings that have been identified in the urban boundaries are scattered throughout this area of the city: one was identified with the ancient structures that appeared in 1894 in Piazza Bovio (under Palazzo della Borsa); another can be seen in the monumental remains located north of the outdoor theater in the convent of Saint Patrizia. A passage from Svetonio confirms their use. In 1943, the bombing of an old building during WWII serendipitously brought to light a thermal complex in Vico Carminiello ai Mannesi. Successively enlarged and modified overtime, this Republican era complex is still visible today. Though it is severely degraded now, it nevertheless illuminates the large concentration of thermal plants in this area of the city. Other small thermal complexes throughout the area were recorded in ancient chronicles but none have been found to date.

As previously stated, the largest concentration of thermal spa complexes have been found in the southwestern area of the city. It is not surprising then that the area comprised of via del Duomo, via S. Nicola dei Caserti, via Giudecca Vecchia, and via Pietro Colletta was called Regio Thermensis, according to an ancient inscription on the base of a statue dedicated to one of the patrons of the city, Lucio Alfio Licinio. Ancient manuscripts indicate that the use of this name persisted throughout the Middle Ages. Though numerous in loco archaeological finds have been interpreted in various ways, it is possible that the relevance of the findings of a vast thermal complex could have given the region its name.

At the end of Via dei Tribunali on the right hand side are Palazzo Ricca and Palazzo Cuomo, that since 1819 have been the seat of the Historical Archives of the Bank of Naples. It was here that Ferdinand I of Bourbon ordered all documents, proceedings and records of the eight public banks in Naples be conserved, merging them together into the bank of the city, from which originated the bank of Naples. In 1617, the “Monte dei Poveri del Sacro Nome di Dio” which was established in 1599 from the fusion of two ancient congregations dedicated to serving those in need, acquired the 16th century Palazzo di Gaspare Ricca as the location for its growing activities. Il Monte, which subsequently assumed the domination of Bank, occupied this building until 1808, the year of the final dissolution of the institution. The 18th century façade in piperno is by Gaetano Barba who also designed the courtyard where there is a chapel dating to 1670 that was designed by Giuseppe Caracciolo. It is preceded by an atrium with marble statues by Girolamo D’Auria. The altar (1671) in the chapel is by Gaetano Barba and the frescoed vault is by Luca Giordano. The paintings, the Immaculate and the Circumcision are by F. Solimena, who also did the Annunciation and Nativity. The rooms on the first floor are decorated with frescoes by Giacinto Diana (1772).

On the right, at the end of the large courtyard and between the two staircases of Sanfelice, a corridor opens on the left, leading you into the archaeological area that was discovered in the 1970s during work to consolidate the buildings. On the left of the corridor there is a large room. On the north side are two large arches in opus latericium (a type of Roman brick work), that presumably led into another room. It was closed off in a later era, perhaps to consolidate or shore up the foundation of the palazzo above it. Of particular importance are the column and the two walls that have split arches suggesting a corridor or access to another room. The side walls are in opus vittatum (a Roman construction technique typically used to erect high walls) at the base and above in opus latericium supporting a large barrel vault.

Continuing along the corridor, on the opposite side we find another large rectangular room that was clearly divided into two areas by a wall of recent construction. The room on the left has a mosaic floor in a black and white geometric design with small white equidistant diamonds running parallel to the minor side. Framed by a double white border, the mosaic continues up the walls to a height of approximately 50cm. The east wall is in opus latericium and in the southeast corner there is a sturdy T shaped base with red paintings of the 4th style (see the four styles below). In the room on the right, there is nothing of particular significance except for the remains of small areas in opus reticulatum (Roman brick work of a diamond shaped pattern), edged in opus vittatum, probably belonging to a cubicula (bedroom). 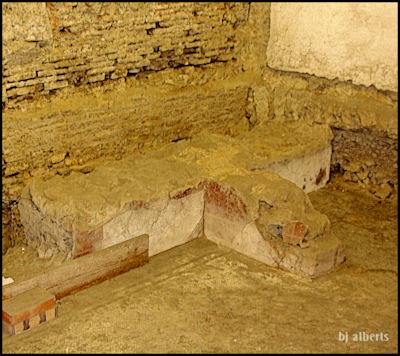 Opposite this room is a much larger room divided into three successive adjoining areas, each of which is then divided into two irregular areas. The remains of suspensura (the square piers that supported a Roman bath) resting on the slabs in the opus latericium suggest there was a hypocaust (under floor heating system) and that the entire area was probably a thermal spa.

The presence of a marble staircase and broad podiums suggest that there were one or more baths in this area. The last of the three zones ends with a wall comprised of brick arches in opus latericium with panels in opus reticulatum. 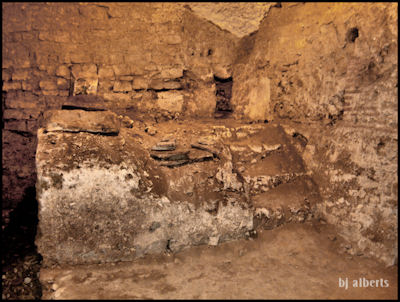 1st style (2nd BCE) – a wall decoration of Greek origin in stucco which simulated marble elements and used vivid colors (yellow, violet, green). It can be considered more of a masonry or architectural style than a style of painting.

2nd style (80 BCE 0 14 CE) – a spatial perspective that tends to give the illusion of the absence of the wall with decorations that divide the wall into three panels depicting podiums, colonnades and ceilings and various images in relative perspective – trompe l’oeil compositions. One could imagine a portico, a basilica, an open space and more.

3rd style (14 – 62 CE) – abandons the illusion of perspective and tends to close the walls into three panels, a black plinth, red center and upper in white. The major prospective impact looked like a shrine with a tympanum supported by columns and decorated with delicate motifs in the background. Predominantly monochromatic, these sometimes included a delicate frame over a monochromatic background either blank or with just a miniature scene located in the middle.

4th style (after 62 CE) – completely distorts the preceding styles with figures of fantasy, a surreal mix of allegorical and mythological images and floral symbols. The dominant color is red.

Visit the Roman Domus under the Bank of Naples