The First Destruction of Pompeii 62 A.D. 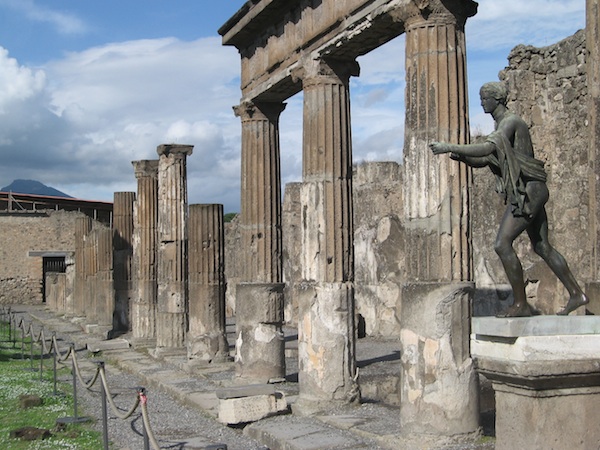 On February 5, 62 A.D. a powerful earthquake, about 7.5 in magnitude  occurred, with the epicenter at Pompeii.

The Latin philosopher and dramatist Seneca the Younger wrote a description of the event:

This tremor was on 5 February, in the counsulship of Regulus and Verginius, and it inflicted great devastation on Campania…Sheep died and statues split. Some people have lost their minds and wander about in their madness. Sixth book of his Naturales quaestiones entitled De Terrae Motu (Concerning Earthquakes)

To give you an idea of the size of the earthquake, it was comparable to the 1906 San Francisco earthquake which caused 3,000 deaths and destroyed much of the city.

Pompeii at the time had a population of 20,000 and was a compact city built in a fashion that could not withstand earthquakes. The construction; beam, brick and block; much of it built on foundations that were ancient, crumbled readily, leading to severe damage to the city. Seneca reported that while Pompeii was severely damaged, Herculaneum had far less damage while Naples was barely touched.

Seneca continues in his vivid description

What hiding-place will creatures find, where will they flee in their anxiety, if fear arises from below and is drawn from the depths of the earth? There is panic on the part of all when buildings creak and give signs of falling. Then everybody hurls himself headlong outside, abandons his household possessions, and trusts to his luck in the outdoors. What hiding-place do we look to, what help, if the earth itself is causing the ruin, if what protects us, upholds us, on which cities are built, which some speak of as a kind of foundation of the universe, separates and reels? Sixth book of his Naturales quaestiones entitled De Terrae Motu (Concerning Earthquakes)

A bas-relief found in the house of Lucius Caecilius Lucundus in Pompeii has been interpreted as a depiction of the damage caused by the earthquake to buildings including the Temple of Jupiter and the Vesuvius Gate. Note how the buildings are askew and seem to be on the verge of collapsing.

Without internet, sms or gps, Rome never knew what hit them when, on the same day, February 5, a tidal wave hit Ostia, the port of Rome. As fate would have it, there were 300 grain ships in the harbor waiting to unload. These ships arrived from Alexandria and Carthage once a year and had the vital grain supplies for Rome FOR THE YEAR. All of them were engulfed by the tsunami, swamped, and the cargoes lost. 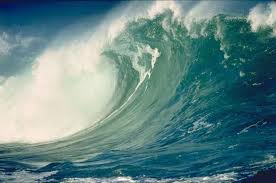 This created rioting in Rome for the people feared they would starve. The Emperor Nero had to quell the crowds by opening the storehouses of grain and rationing it.

Meanwhile back at Pompeii, the earthquake affected the demographics of the city. The rich patricians decided to move elsewhere and a new class of merchants and traders took their place and rebuilt the city.

The process of repair was slow and extensive. It involved projects such as the embellishment of the Forum, the rebuilding of the Temple of Isis, and repairing the city’s water supply. Nero’s influence was felt because his second wife, Poppaea Sabina was Pompeian and as such, money and power were funneled to Pompeii to rebuild the city and the social structure.

In visiting Pompeii today, one can see where structures were repaired. Architects and archeologists can date structures and repairs by the type of masonry used. 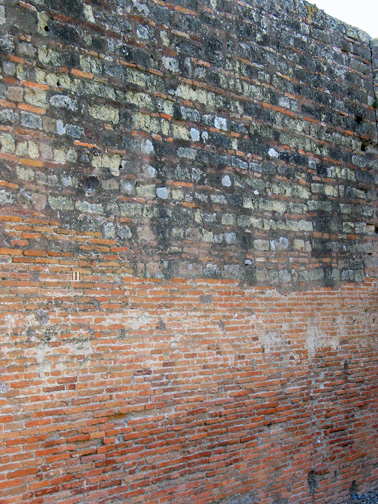 The lower part of the wall is brick faced concrete (opus latericium). The wall must have been severely damaged in the earthquake of 62 A.D. and repaired with alternating rows of brick and small rectangular stone blocks (opus vittatum mixtum). 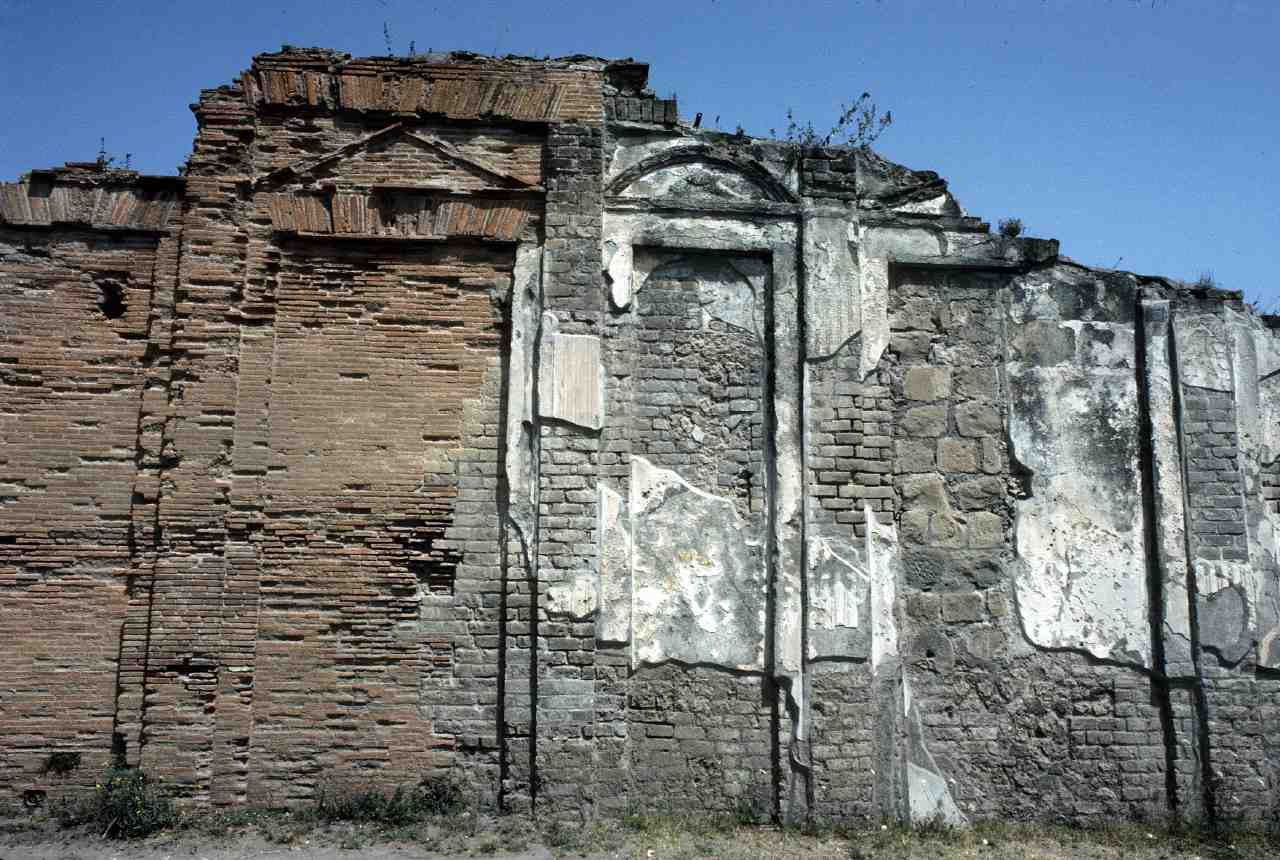 Note the orange masonry on the left hand side of this building, it is the repair work done after the earthquake. 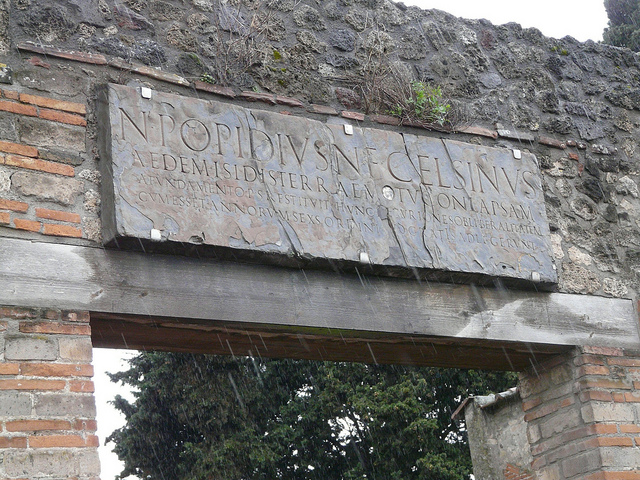 Dedicatory plaque at the Temple of Isis. The plaque states that Numerius Popidus Celsinus provided the money to rebuild the temple after the earthquake. 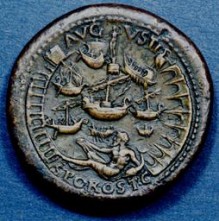 A coin dating to about 64 A.D. depicts ships flailing about, helter-skelter, in the Port of Ostia. While some scholars claim it is a commemorative coin celebrating the 10th anniversary of the completion of the work in the harbor, it could also be seen as a remembrance of the terrible toll the tsunami took on the people of Rome.

Next up – Pompeii – The Last Days Part I 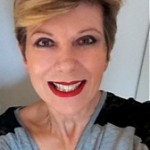 Ann Pizzorusso is a geologist and Italian Renaissance scholar. After many years of doing virtually everything in the world of geology (drilling for oil, hunting for gems, cleaning up pollution in soil and groundwater) she turned her geologic skills toward Leonardo da Vinci. See her work on Leonardo’s Geology. You can find Ann on Facebook at Leonardo da Vinci Virgin of the Rocks and on Twitter @VirginoftheRock.