At last I return with Saturday Stroll – Too Hot to Stroll Part 3 – A Tour of the Posillipo Coast. When last we left off, we had sailed from Mergellina to Villa Carunchio in Part 1. And in Part 2, we made our way to the famed Marechiaro, a 13th century fishing village turned summer vacation destination immortalized in Salvatore di Giacomo’s song of the same name. Today, we sail west around the promontory of Posillipo.

This area of the Posillipo coast is of  immense natural, historic and archaeological importance. In 2002, 42 hectares that extends from Marechiaro to Baia Trentaremi and out into the bay was designated a marine protected area (see the map of the protected area). Known as Area Marina Protetta Parco Sommerso Gaiola (Protected Marine Area Gaiola Underwater Park) the area is an important center of research and includes the two tiny islands of Gaiola, an underwater park, archaeological remains along the coast, and the Parco di Pausilypon Archaeological park. Under the purview of the Special Superintendent for Archaeological Heritage of Naples and Pompeii, the area is managed by the Centro Studi Interdisciplinari (CSI) Gaiola, who organizes walking, boat, snorkeling, and birdwatching tours for the general public. 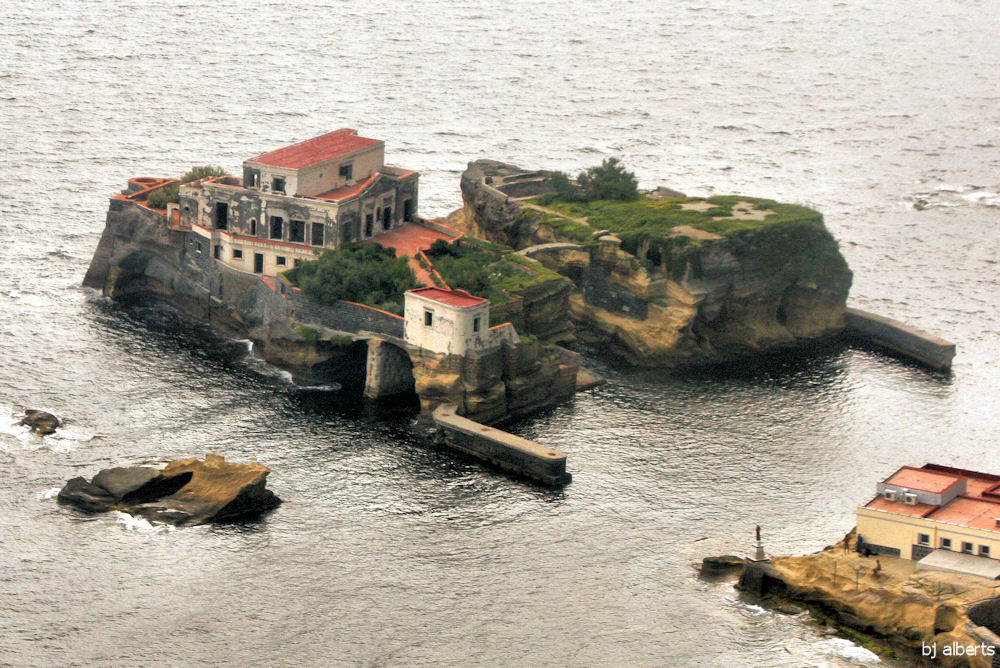 One of the park’s archaeological ruins sits at the shoreline just past Marechiaro. Known as Palazzo degli Spiriti or Casa degli Spiriti (House of the Spirits), it is believed to have been a nymphaeum – a monument dedicated to the nymphs. Dating to the 1st century BC, it was part of the Roman Villa of Publius Vedius Pollio, a Roman aristocrat and friend of the Roman Emperor Augustus. 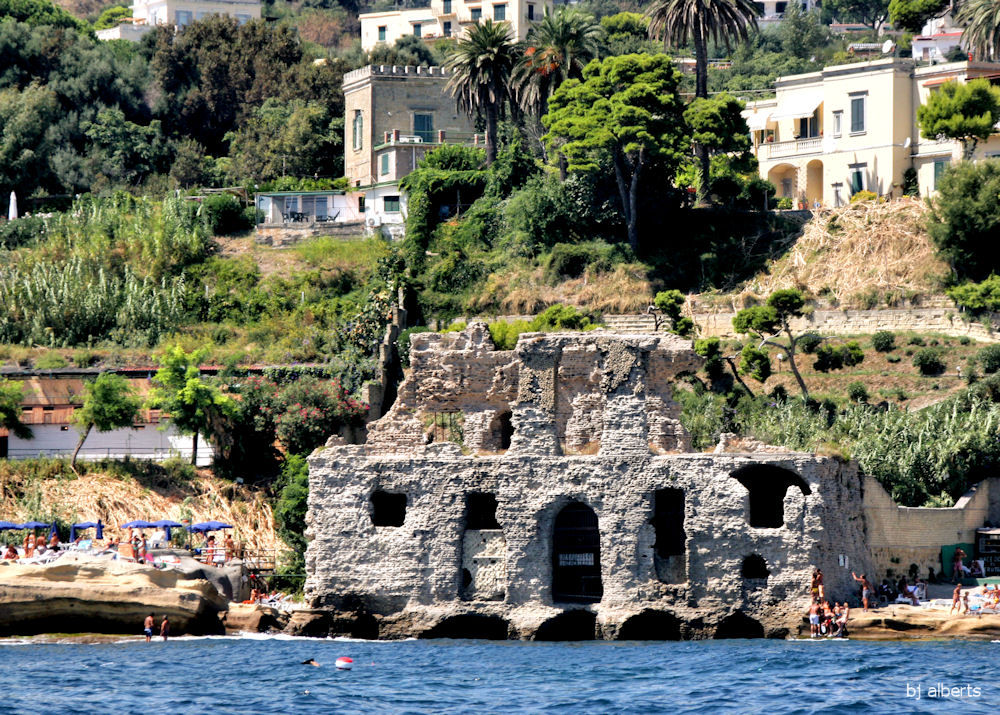 A rich man with a passion for breeding eels he was described as vicious and cruel by Pliny the Elder.

Vedius Pollio, a Roman freedman, was a courtier, and a great favourite of Augustus. ‘He devised experiments of cruelty by means of this creature {nitiracim); for he caused certain slaves condemned to die, to be put into the stewes where these muraenes were kept, to be eaten and devoured by them: not that there were not wilde beasts now upon the land for this feat, but because he tooke pleasure to behold a man torne and pluckt in pieces all at once: which pleasant sight he could not see by any other beast upon the land.’  On one occasion when Augustus was a guest at Pausilypon a crystall or glass vessel was broken by one of the slaves. The wretch would assuredly have paid the penalty had he not begged his life of the Emperor, who not only granted the petition, but caused all his host’s glass vessels to be smashed and, instead of the culprit, to be thrown into the fish-tanks, where the fragments may still be lying for the joy of future archaeologists. R.T. Gunther quoting Dr. Holland’s translation of Pliny in Pausilypon: The Imperial Villa Near Naples, Oxford, 1913

Built on the Promontory of Posillipo, Pollio’s Villa was designed to capture the sun, the breeze and the sweeping panoramas of the Bay of Naples. Known as Villa Imperiale di Pausilypon, Pollio bequeathed the villa to Augustus upon his death in 15 BC. The villa became the imperial residence of Augustus and that of his successors and is sometimes referred to as the Imperial Villa of Augustus.

The villa and its grounds covered an area of some nine hectares, extending from Marechiaro to the Baia of Trentaremi, and down to the islands of Gaiola. Remains dating from the first century BC to the 4th century AD have been discovered in the complex which included residential buildings, a temple, the Nymphaeum, a theater, and an odeon. A covered theater used for musical and poetry shows and competitions, the odeon was connected to the theater by a garden. There is also evidence of a thermal bath complex and a vineyard. 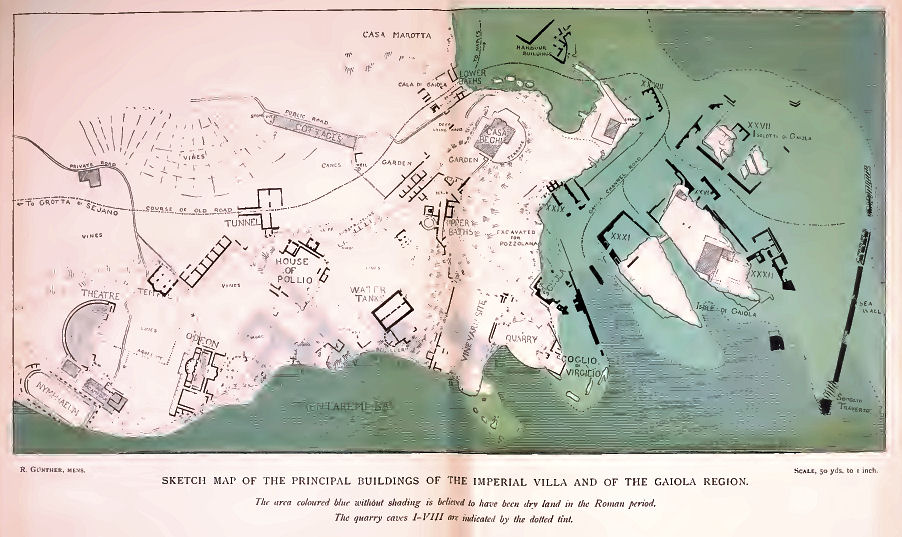 Map of the Pausilypon Archaeological Site
Pausilypon: The Imperial Villa Near Naples, Oxford, 1913 via Internet Archive
Not In Copyright

Much of the site has been lost to time or submerged underwater, but some important ruins remain including the theater and odeon. Unfortunately, the site was abandoned for many years and fell into a state of neglect. 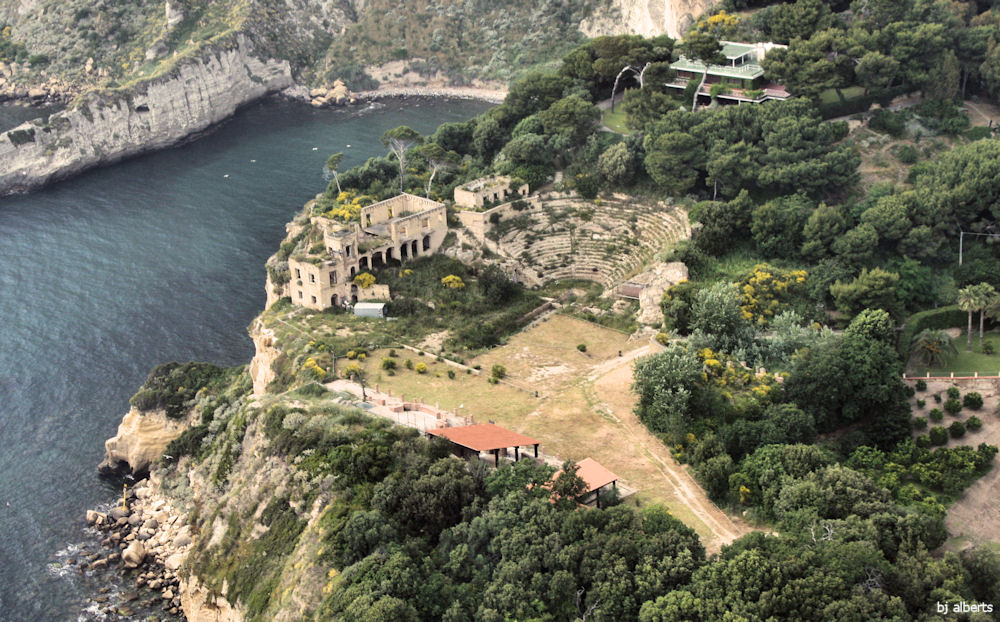 But thanks to extensive restoration work done by The Special Superintendent for Archaeological Heritage of Naples and Pompeii, in cooperation with the Comune di Napoli, a large portion of the site was reopened to the public in April 2009. Today, the site is also being used to host shows and concerts during the summer. 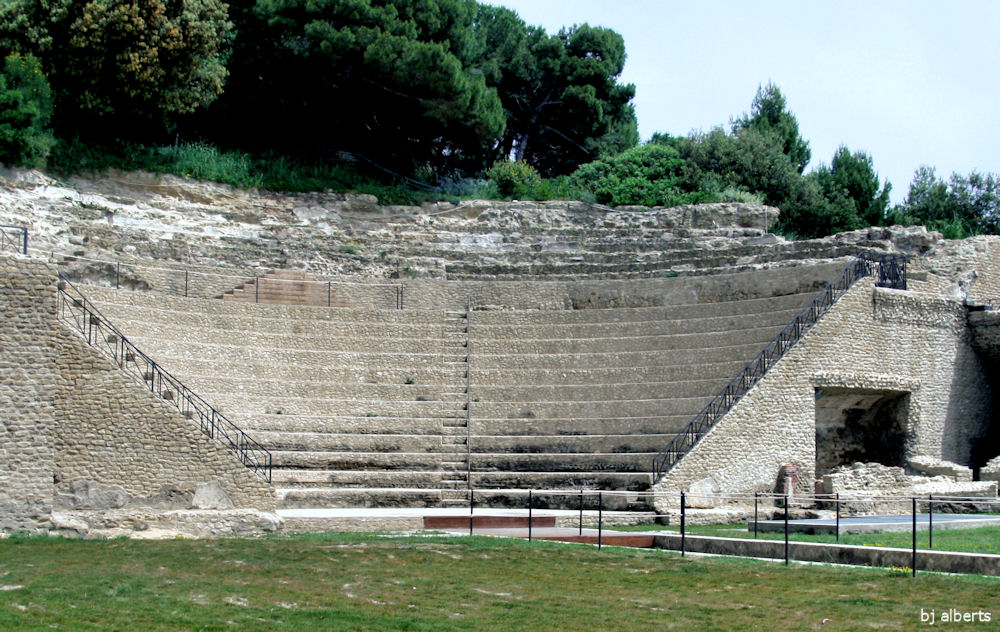 The site is reached via a 770 meter tunnel that connects Bagnoli to the valley of Gaiola, the Grotta di Seiano. Built in the 1st century AD by the architect , it connected Villa Pausilypon with the other villas in Posillipo and Naples with the ports of Cuma and Pozzuoli.

It is almost September, the weather is starting too cool down, and we can get back to our Saturday Stolls in the city. Check back next week to find out where our first Saturday Stroll of September takes us.