It’s been a beautiful start to the fall and with all of the events going on around the city, our Saturday Strolls got a bit sidelined. What with outdoor concerts and fairs, museum exhibits, markets and marathons, it’s been non-stop since September. But finally, we made it back to Centro Storico to finish our stroll!

When we last left off in The Classic tour of Centro Storico (Part 1), we were at Piazza San Gaetano. This piazza sits along Via dei Tribunali, which was the decumano maggiore – main decumanus (east-west street) of ancient Greco-Roman Naples. As we talked about out last time, the area around the piazza corresponds to ancient Naples’  Greek Agora and Roman Forum, the marketplace and main gathering area of the city. Today, this vibrant and chaotic piazza is still a central gathering spot and I have to wonder if it was just as crazy in the days of the Romans – minus the screeching cars and motos of course.

Arriving here around noon we found the piazza in a fevered pitch. The outdoor tables of the caffès were jammed and inside, people were three deep at the bar. In the piazza and on the street, families, neighbors and friends, babies to grandparents, were stopping to meet and greet. In front of San Paolo Maggiore, a hand cart parked halfway into the street and piled high with nuts and candy attracted the attention of passersby whose stop at the cart caused one traffic jam after another. On the other side of the street, knock-off hand bags were lined up like little soldiers on top of old blankets on the ground creating a border around the open area in front of San Lorenzo Maggiore. There, large groups and small gathered to catch up on the latest gossip, teenage boys rough housed, and Alfredo Imparato, one of small number of posteggiatori remaining in Naples, was singing and playing his guitar, adding to the din. And up and down Via dei Tribunali, senoras with overflowing grocery carts vied for space with the motos, cars and delivery trucks.

Yet somehow in the madness we managed to find a table at a caffè on the corner facing the San Lorenzo Maggiore and San Paolo Maggiore churches to watch the show. Being the gentleman that he is, my husband grabbed the outside seat, saving me from sitting about 6 inches from the cars that were barreling down Vico Cinquesanti and turning left onto Via dei Tribunali. Amid the craziness, I looked up at San Paolo Maggiore and immediately the world around me faded into the background. The sky above the statue of San Gaetano, arms stretched out and head raised toward the heavens, was this amazing shade of blue and the massive San Paolo Maggiore church seemed to be striking the same pose as the statue. 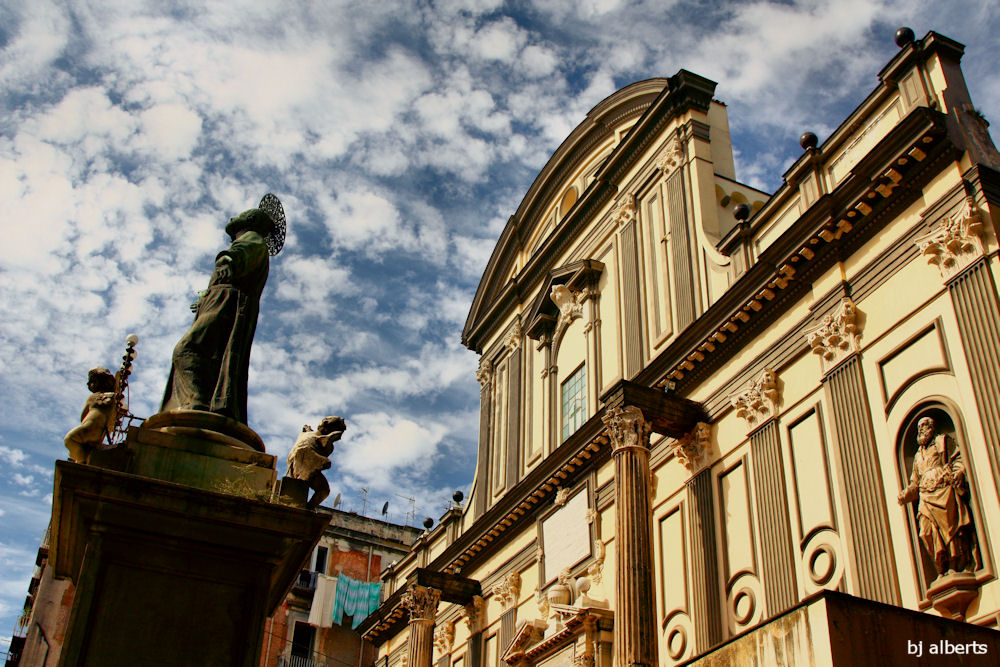 After polishing off some fresh graffe – these absolutely scrumptious sugar doughnuts that are as light as air and covered in sugar that will end up on every inch of you, we decided it was time to get on with the stroll. 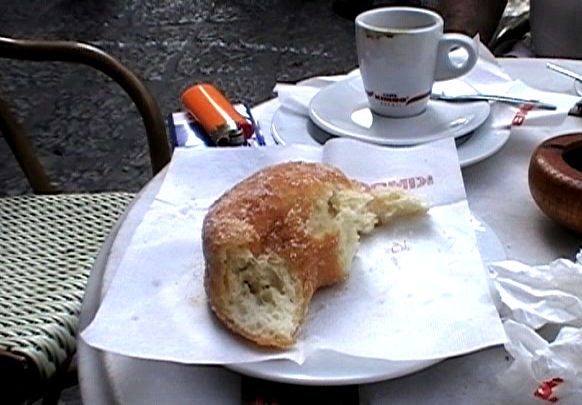 We headed up the steps of San Paolo Maggiore to see about getting those inside pictures I promised last time, but a late start to the morning meant we arrived during mass. I did manage however to get a nice detail shot of one of the columns of the 1st century temple of the Dioscuri. 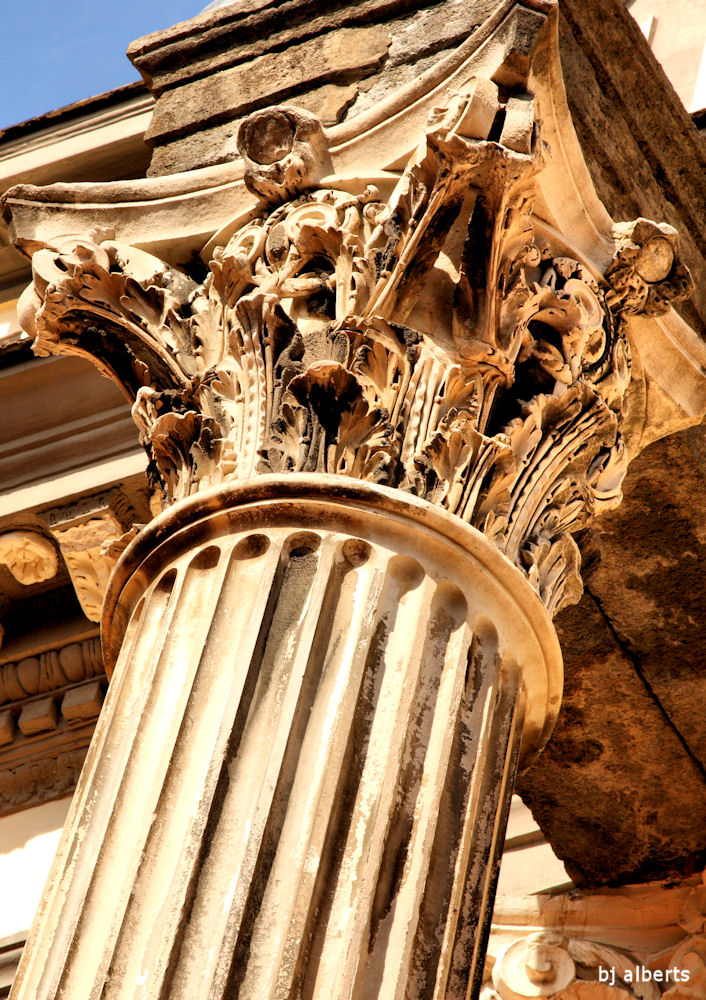 Across from San Paolo Maggiore is Via San Gregorio Armeno, a narrow alley that is famous around the world. Known as Christmas Alley by most visitors, it is home to the shops that hand craft the famed presepi, the Neapolitan Christmas Crechès or Nativity Scenes, as well as the Pulcinella figurines and the Neapolitan tamborines. 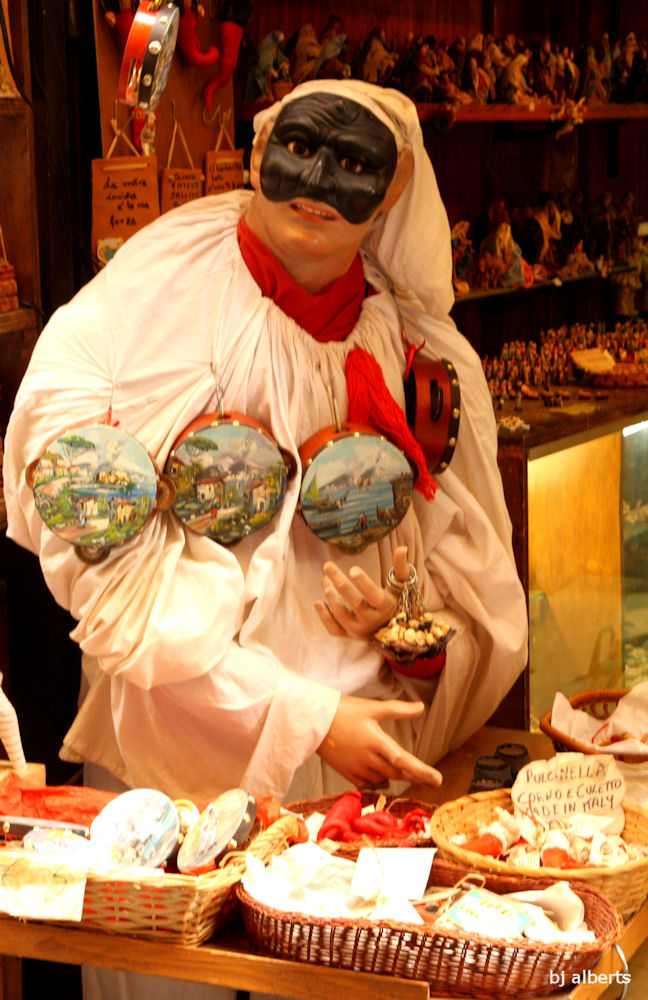 As we headed down Via San Gregorio Armeno, I was stopped dead in my tracks by an open gate, the entrance to the cloister of the San Gregorio Armeno church. I don’t know whether it was recently re-opened or I just never managed to go by here at the right time, but it was the first time I ever found it open and I was up the stairs in a shot. 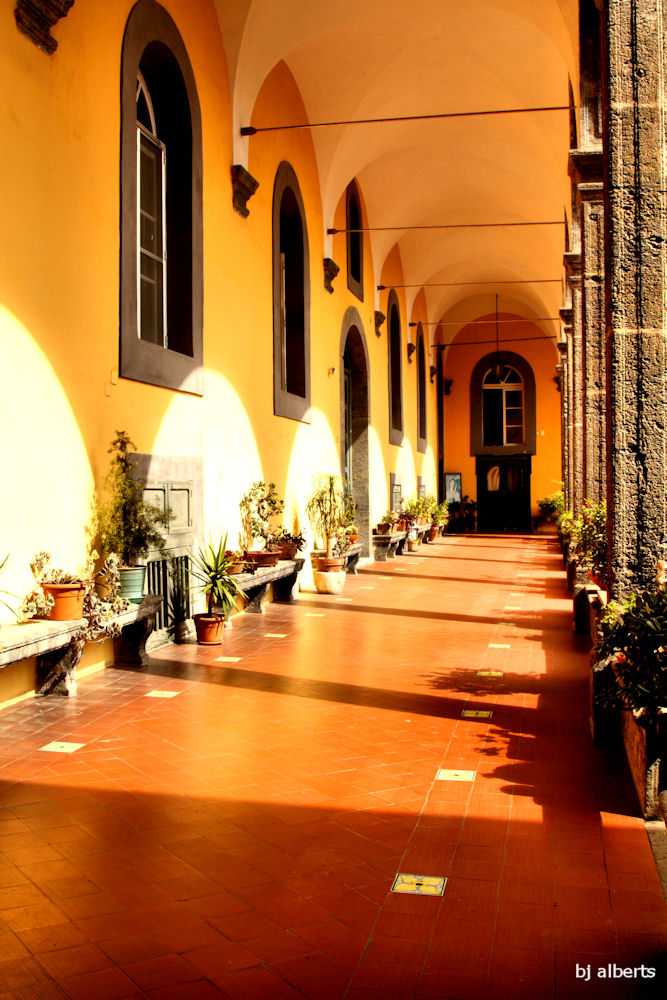 Back outside we continued down Via San Gregorio Armeno to Via San Biagio dei Librai and headed right towards Piazza San Domenico Maggiore. Via San Biagio dei Librai, which becomes Via Benedetto Croce heading west and which takes on several other names heading east is the decumano inferiore – lower decumanus. A very long street that runs from Piazza del Gesù well past Via Duomo, it is commonly called Spaccanapoli because it divides the ancient northern and the southern parts of city. 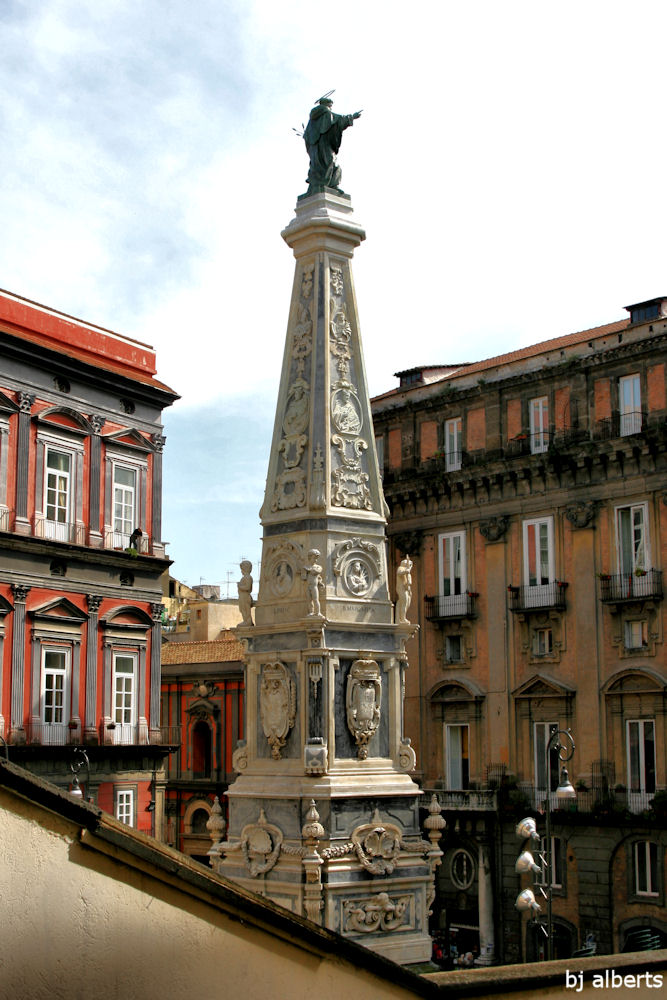 Also in the piazza is the late 13th/early 14th century San Domenico Maggiore church. The exterior of the church is not much to look at – probably because it is actually the back of the church, but the inside is spectacular. 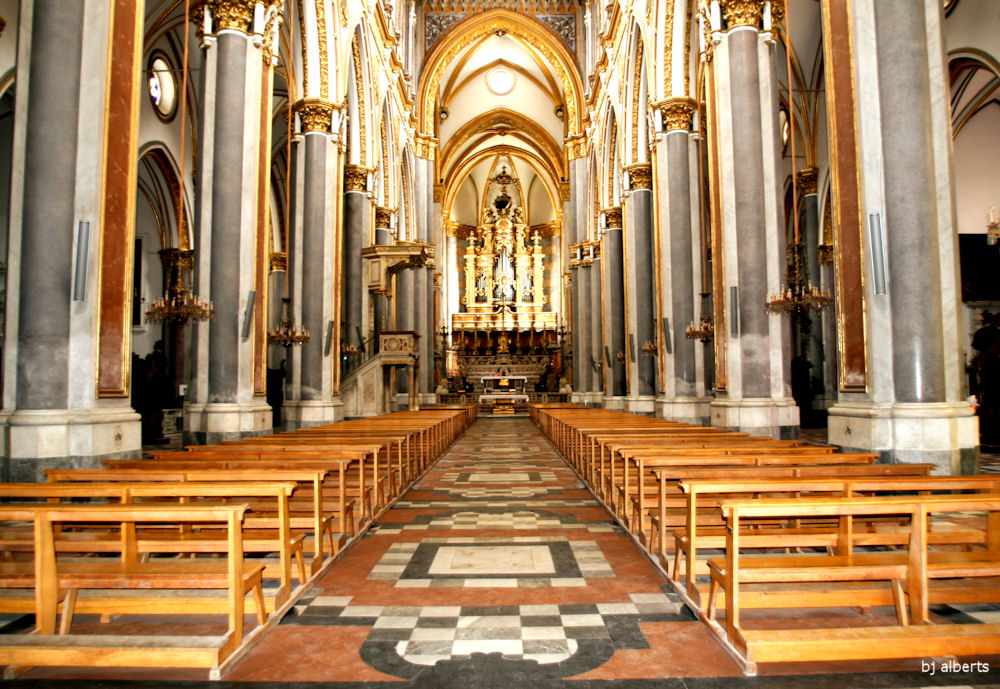 From Piazza San Domenico Maggiore it’s a quick walk up to the Sansevero Chapel and Museum to see the Veiled Christ, a very famous sculpture by Neapolitan sculptor Giuseppe Sanmartino.  The chapel sits on a side street about a block north of the piazza. The outside of the chapel is non-descript and I used to walk right by it without noticing the little brown sign announcing its presence. But much to my surprise, about three months ago they opened a Ticket Office and Bookshop on the opposite corner so you can’t miss it. At least that’s what I thought. But after sitting outside the church for about 20 minutes directing just about every Italian and foreign visitor who walked right by the ticket office,  I’m not sure opening the ticket and bookshop was worth the bump in ticket price to €7,00 (€5,00 with an ArteCard). 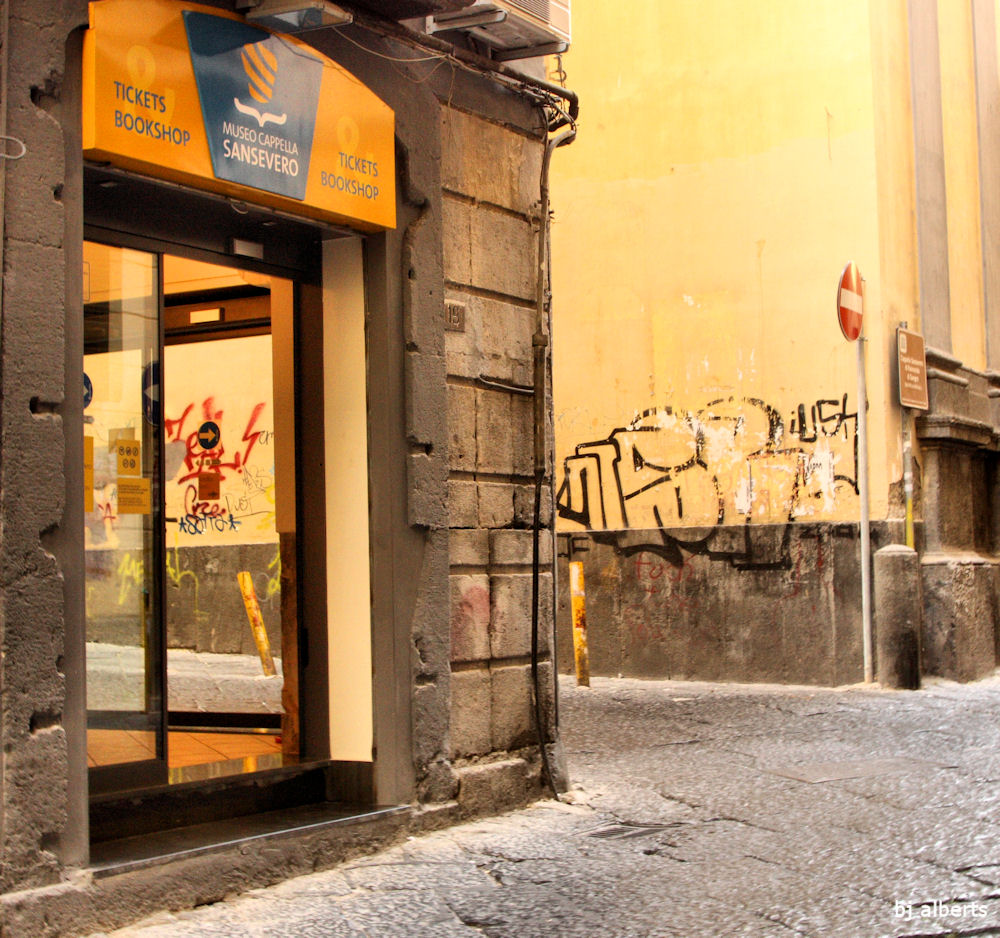 We head back to Piazza San Domenico Maggiore and make our way to the Monumental Complex of Santa Chiara. This is an absolute treasure and one of my very favorite places to wander through in the city. The complex includes the 14th Century Gothic Santa Chiara Church, one of the most spectacular cloisters in the city, the Majolica Tiled Cloister, a museum of the artifacts recovered after the complex was bombed during WWII, a presepe display, and a Roman Bath Complex.