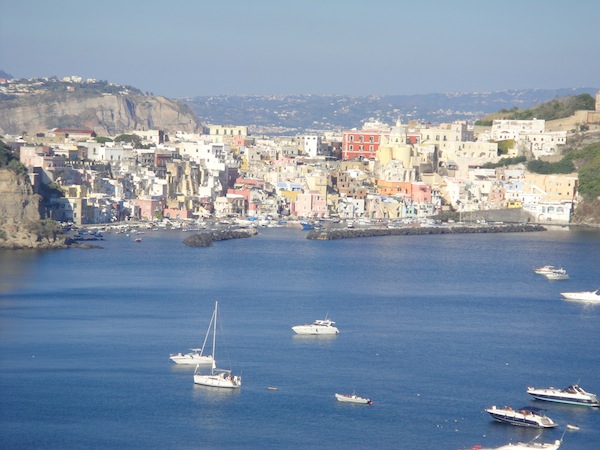 Procida’s picturesque village, Corricella, is nestled cozily between strata of volcanic tuff and ash. The mainland, near Monte di Procida is visible in the background.

Procida lies low in the Gulf of Naples, much like a snoozing crocodile–immobile, so that one barely notices it. From the air though, it looks to me like a Scotty dog with a crescent tail loping toward Miseno ( feel free to indulge your own imagination, hint: viewed sideways it resembles the Euro sign). 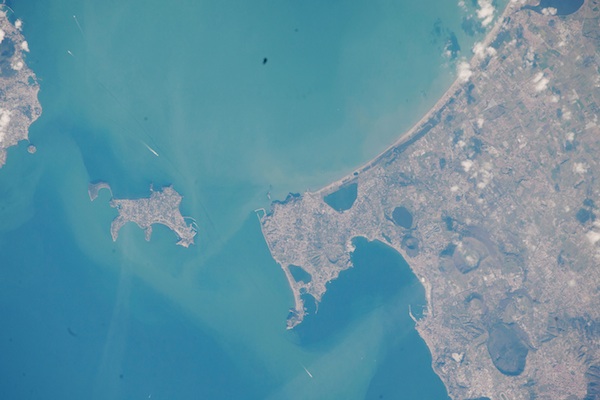 Procida is the smallest inhabited (pop. 10,600) island in the Gulf of Naples and at only 4 sq km is 1/10 the size of Ischia. Its uninhabited baby sister, Vivara, is a miniscule 0.75 sq km.  The form of these islands is of course, the result of many volcanic eruptions. 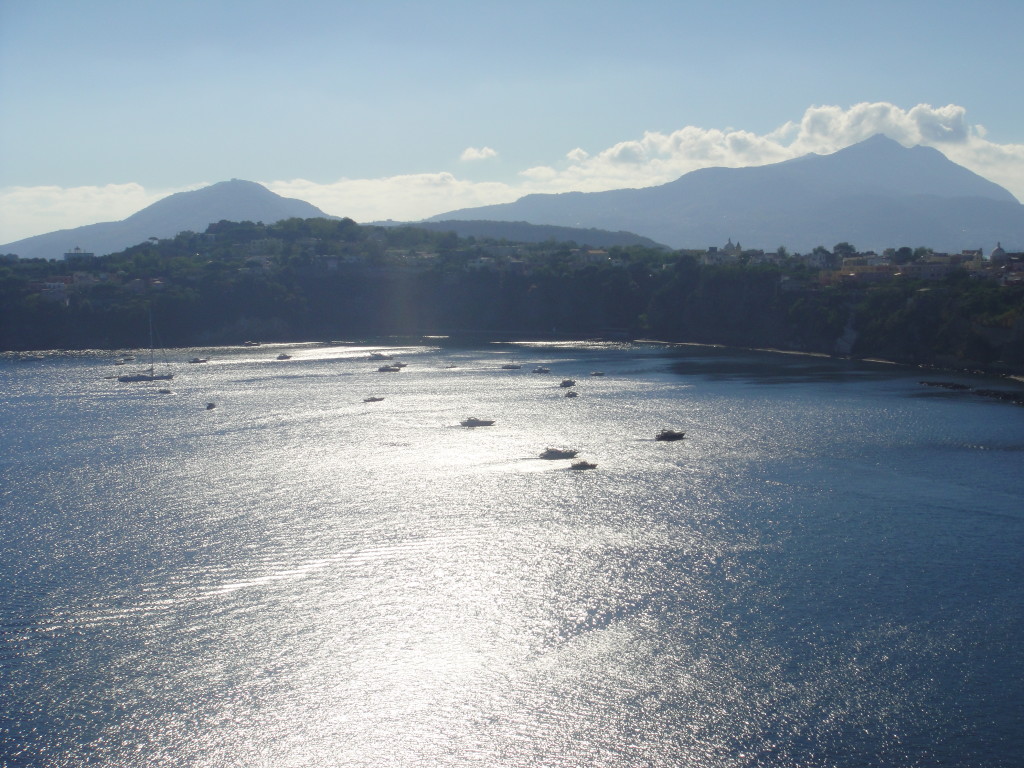 Ischia (background) looms over Procida (foreground) whose highest point is only 91 meters. This view of the bay of Marina Corricella is taken from the promontory at Terra Murata. Pliny writes that the name for Procida has a Greek origin meaning “stretched out or lying down.”

Archeologists tell us that Procida has been inhabited since the XVI century B.C. by settlers from the area of Mycenae in the Greek Peloponnese. In the VIII century B.C., it was a port used by the Euboeans who settled in Ischia and Cuma. Recent archeological finds have provided scholars with a missing link in their reconstruction of the movements of XVII-XIV century B.C. Mediterranean voyagers.

Procida is very valuable for geologic research because the volcanic deposits found there pretty much represent the entire history of the Campi Flegrei and are readily visible along the coastal cliffs.

Procida’s volcanic activity started some 74-55 ka (thousand years ago) and about 39 ka the Campanian Ignimbrite eruption produced the large Campi Flegrei caldera.  About 19-17 ka a number of volcanoes erupted on the island, covering it with a wide variety of material  (for geologists these are: welded pyroclasts, lithic breccias, olivine rich magma, ash and pumice).  These volcanoes also produced the marvelous bays and beaches we get to enjoy today. 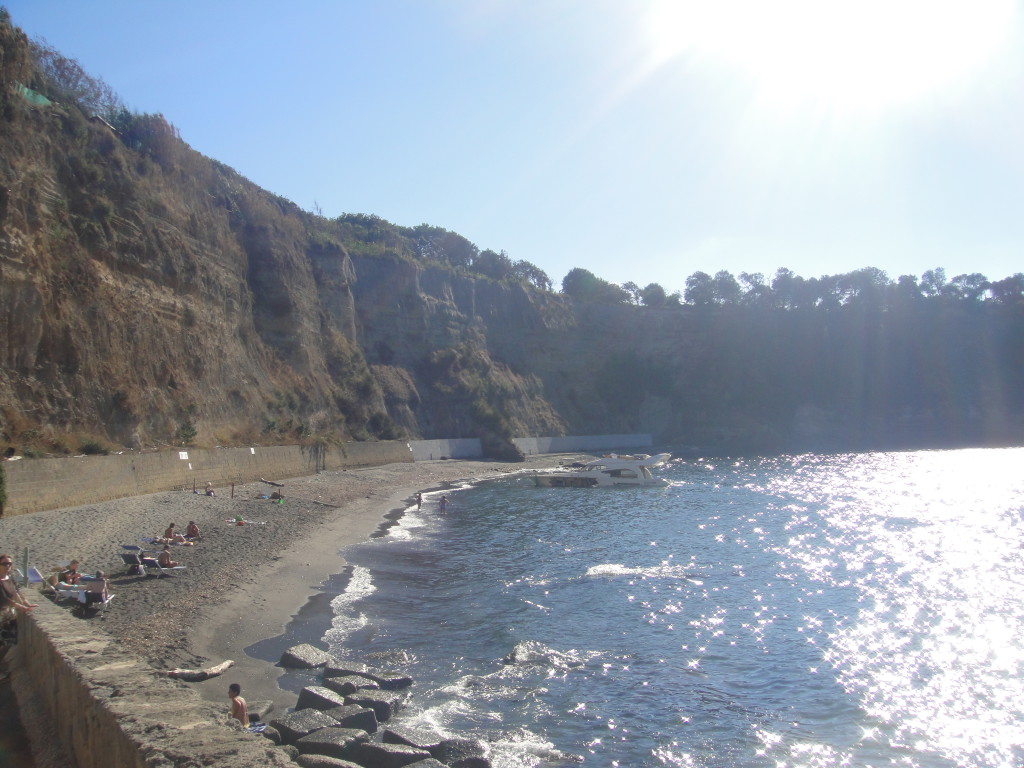 The beach formed by the Pozzo Vecchio Crater was the location where scenes from the film Il Postino were shot.

Procida and Vivara are actually an extension of the Campi Flegrei volcanic complex, an area which encompasses Naples and west to Cuma.   Known as the Phlegrean Islands (Isole Flegree), they were not originally islands but part of the mainland.  Over time, some of the original craters  were  eroded by the sea, destroying the connection to Capo Miseno– those which remained formed the two islands. 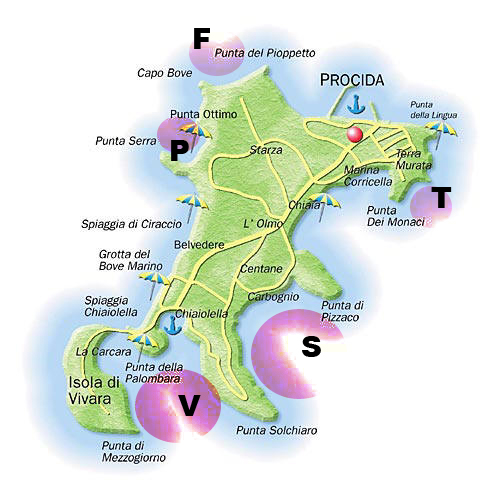 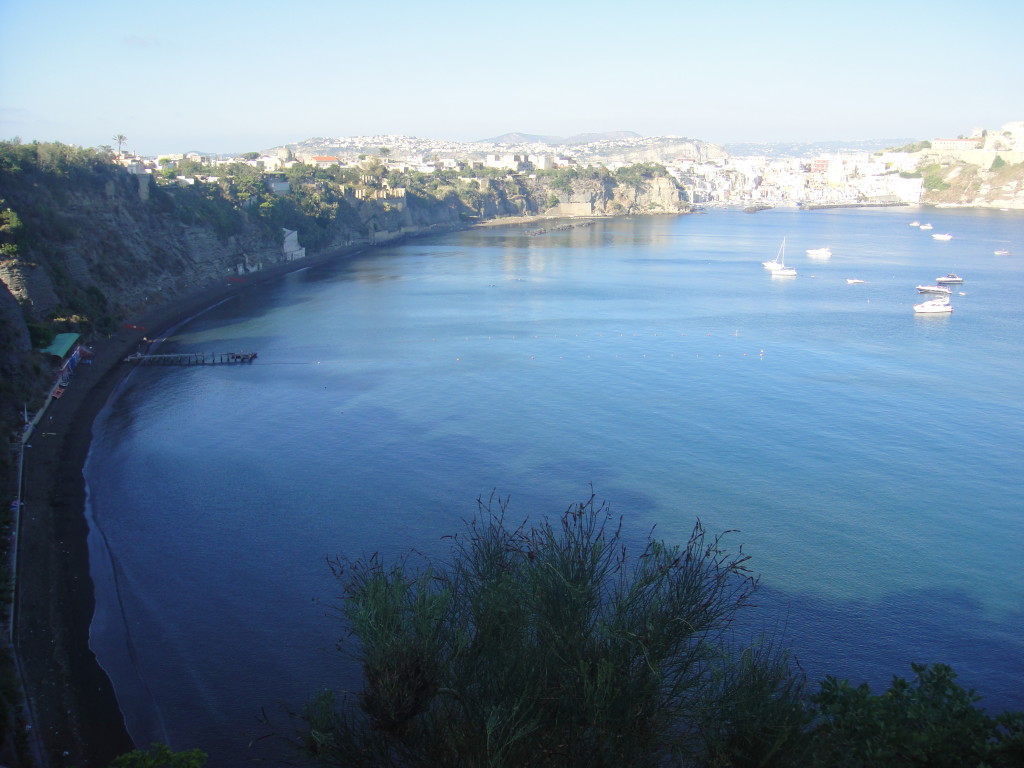 This magnificent landscape offers not only sandy beaches but a safe harbor for the fishing boats of Marina Corricella. The protected coves all over the island, with their tranquil waters belie  their violent volcanic birth  just a few short years ago (in geologic time, that is). 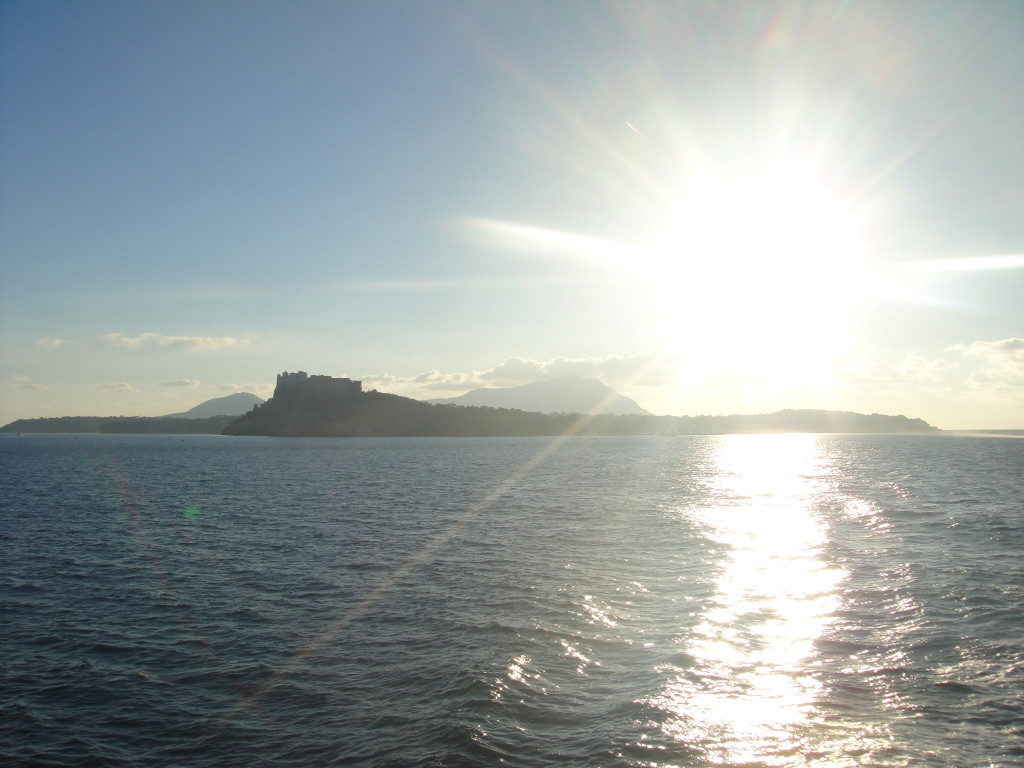 Procida lies low on the water, Ischia is much more imposing in the background. Another difference between Ischia and Procida is that the latter does not have any thermal springs. 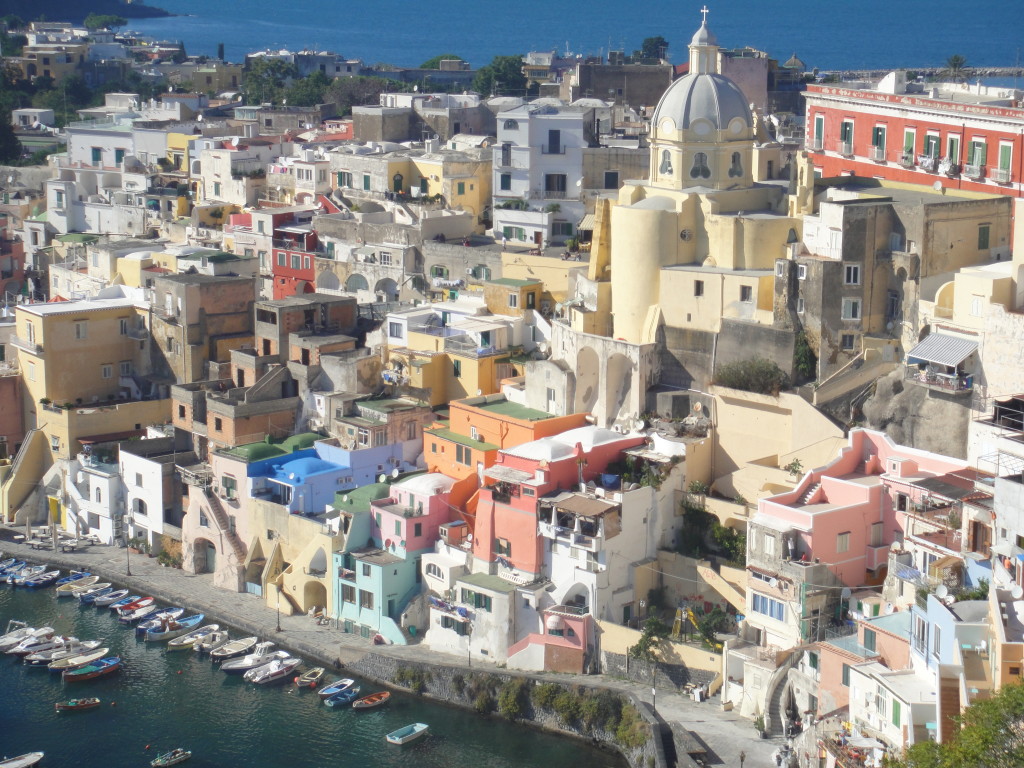 The pastel tinted homes are characteristic of the island.  The locals say that the houses of Corricella are painted various colors so the fishermen can determine which home is theirs when out at sea. 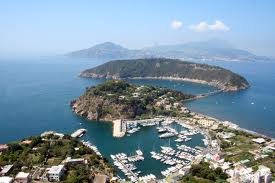 The remnants of the volcanic crater that now forms the adjoining island of Vivara are seen in the center of the photo. Ischia is in the distance and Procida in the foreground.

Even though Vivara was once attached to Procida, it originated from different volcanic activity starting some 55 ka as evidenced by its distinct tuff and breccia. This comma shaped island is actually the western margin of a crater, the remainder of which is submerged. As late as the Roman era it still was connected to Procida. In 1957 the two islands were joined again. This time by a causeway carrying the pipeline which brings water to the islands. It was the first underwater aqueduct in Europe. Today, Vivara is a nature reserve which can be visited. Reservations can be made with the Comune di Procida 081-810-9259 or check the website. 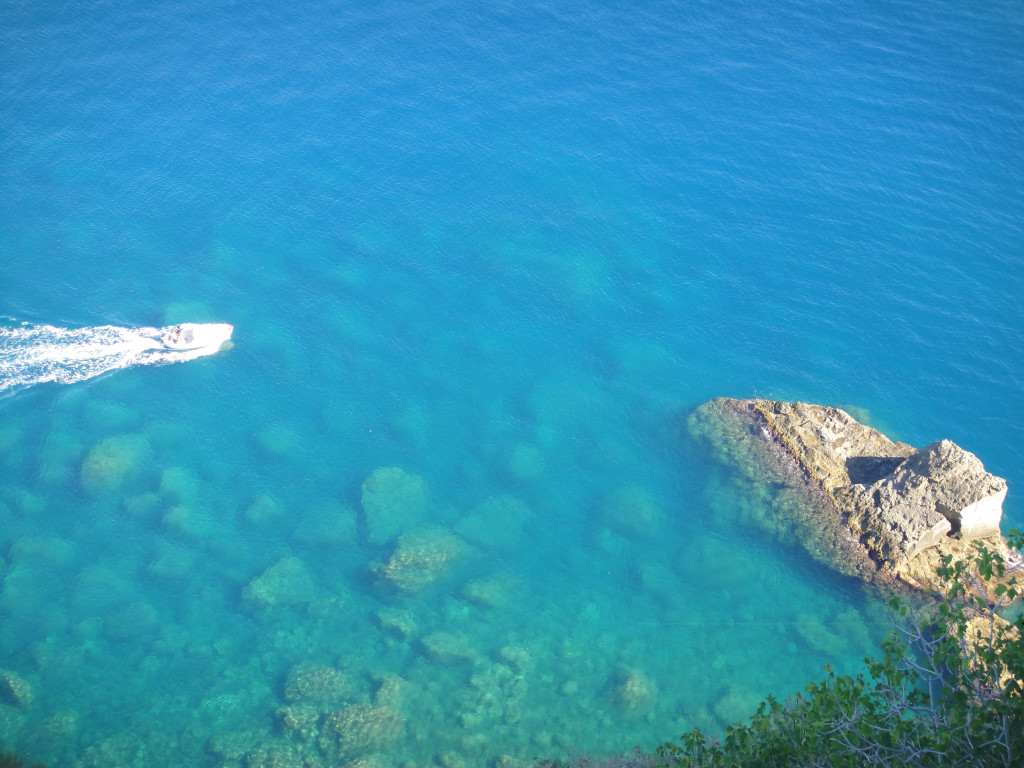 Procida is part of a marine sanctuary which includes Vivara and Ischia so marine life is protected in the crystalline waters. 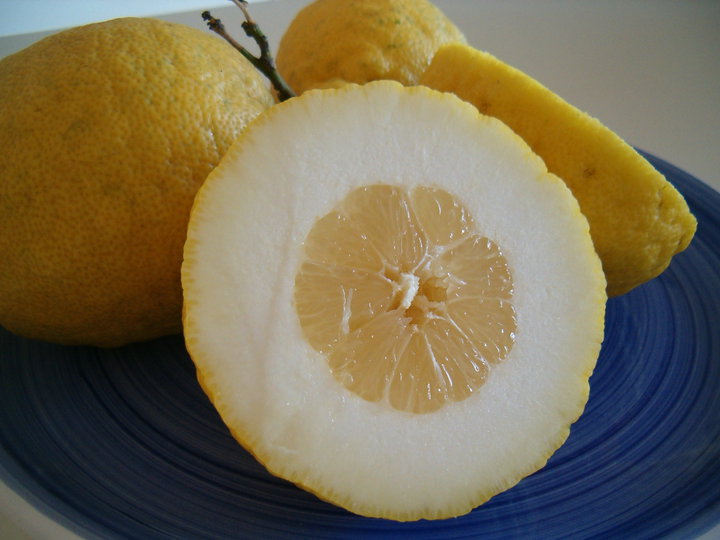 Let’s not forget about food! To accompany the fine fish, Procida has one of the most unique dishes I have ever tasted. Lemon salad. Yes, you hear me right, but not just any lemon. The Procida lemons are called “limoni pane” or bread lemons because of their abundant pith. They are also sweeter than a regular lemon. Here is the recipe.

If you are lucky enough to be in the area at Easter, don’t miss one of the most sacred festivals in the area, the mysteries of the life of Christ on Good Friday.. Read about it here.

In sum, Procida is just another geologic jewel in the crown we call Naples.