Pompeii – The Last Days Part I 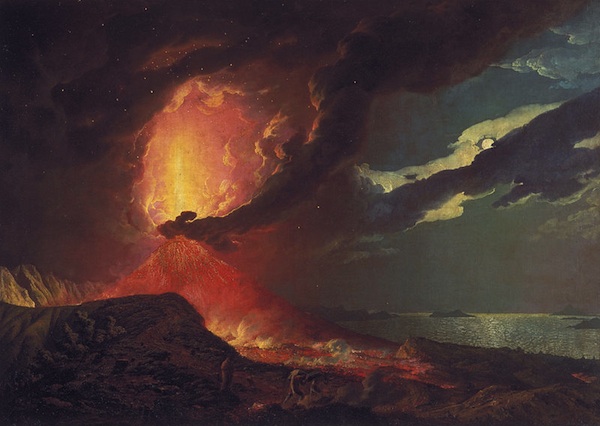 In about 650 B.C. the Etruscans settled Pompeii and remained there in coexistence with the neighboring Greeks until the Samnites conquered the city in the 5th century B.C.. After a period of  war and expansion, the Romans gained control in about 80 B.C..

Pompeii was an idyllic spot, and everybody wanted to be there. As they say in real estate: location, location, location. Perfectly located on the Gulf of Naples, with a large, lushly forested 6,000 foot mountain behind it, the land was beautiful, fertile, and the wine produced would make Bacchus proud. The inhabitants of Pompeii could not have known that their fertile soil was volcanic as they didn’t even know their mountain was a volcano. It had not erupted in 1,800 years. And, by the way, there was no word for volcano in the Latin language. Everything was perfect, a port location for easy access, a mild climate, and an elite area which saw some of the most exclusive villas in the empire being constructed. 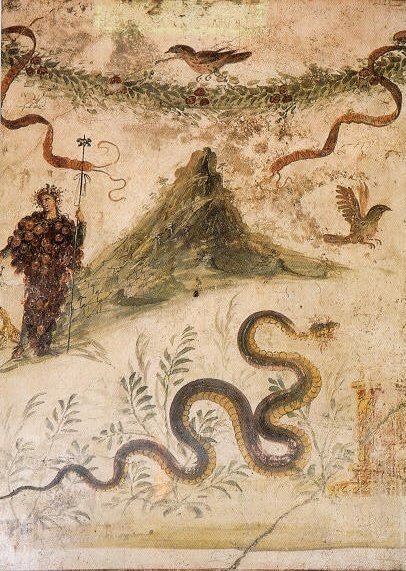 A view of Pompeii before the eruption. Note  Bacchus, the god of wine, and the symbols of fertility, tranquility and hospitality with a single, 6,000 foot mountain in the background. From a wall fresco at Pompeii, now in the National Archaeological Museum.

All was fine until the earthquake of 62 A.D. when the elite of Pompeii decided to relocate to other areas. With Nero’s aid and the support of his wife Poppaea Sabina, a native of Pompeii, life resumed, buildings were repaired, a new class of people moved in and the city regained its prosperity.

On the evening of August 22, 79 A.D., across the bay at Miseno, Pliny the Elder, head of the Roman fleet was dining when he noticed the wine in his glass was moving. A ground tremor, he thought. It would pass. It happened frequently here in Campania. Shortly after, he received word that the water supply to Naples as well as the Piscina Mirabilis, the large cistern vital to supplying water for the Roman fleet in Miseno was cut off. This he could not explain. Perhaps there was some blockage in the Aqueduct Augusta, the pride of Roman engineering, which brought water from the Apennines. He sent word to Rome about the problem and then sought out the aquarius (water engineer). The aquarius had just received word that the aqueduct had failed near Nola. Witnesses told him that a strong smell of sulfur was noticed prior to the aqueduct failing in just a few hours. None of this was normal, he recounted to Pliny. 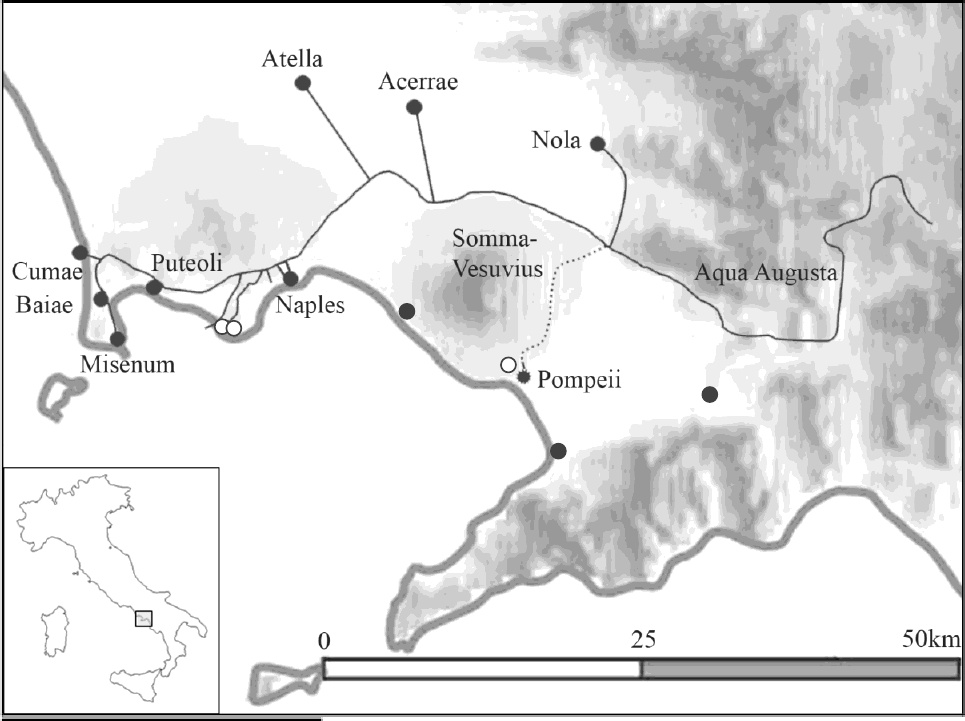 The aquarius managed to secure a ship from Pliny to travel across the bay quickly in order to reach Nola to make the necessary repairs. He would hire a work crew in Pompeii and proceed to Nola overland. Upon reaching Pompeii the next day, August 23, the aquarius found it nearly impossible to find anyone willing to work as it was a major holiday, the Vulcanalia, a day dedicated to Vulcan the god of fire.

The next day, August 24, Pliny, while still trying to resolve the water problem, was called to his terrace to watch the only natural catastrophe in Roman history which left an eye witness account. As he looked across the Bay of Naples at about 1 p.m. he saw a giant mushroom cloud of gas, rock and dust, blow the top 3000 feet off the top of the mountain that had resided on the Gulf of Naples for 23,000 years!

A complex set of volcanic events which would last for three days was started by a buildup of gas below the mountain which exploded with the force of 40 atomic bombs. The entire top was pulverized, and the force of the explosion jettisoned some 1. 5 million tons per second of volcanic pumice, ash and gas 3-5 miles straight up. There was no lava as the explosion was too hot and too gaseous in its composition.

The cloud of gas and dust loomed over the destroyed mountain, but the heavier pumice, tuff and rock fragments started beating down on Pompeii like a horrific black hail storm. As the citizens ran for cover from the pummeling they were taking in the streets, they took cover in public buildings, cellars, cisterns and other low lying areas which were south of the city, away from the eruption. While the eruptive column of gas would blast upward for over 11 hours, within a short time, gravity forced the black eruptive cloud downward. With the prevailing wind coming in from the NW, the falling material headed directly for Pompeii, like a giant wave of black, smoky, toxic gas mixed with dust, rock fragments and debris.

This assault on the city would continue for three days. Volcanic debris covered the areas mainly to the southeast, reaching as far as Paestum, some 100 km away. 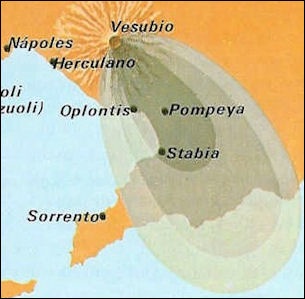 Direction of the dispersion of the debris from the volcanic cloud. The darker color indicates more intense deposition.

With the critical decision being to stay inside and wait for the assault to stop or try to run away, the choice was certainly one of life or death. While many died fleeing, those who remained in low lying areas died because of the accumulation of toxic gas close to the ground. The bodies found in cellars, cisterns and low lying areas died from asphyxiation by gas which is heavier than air and accumulates in areas low to the ground. 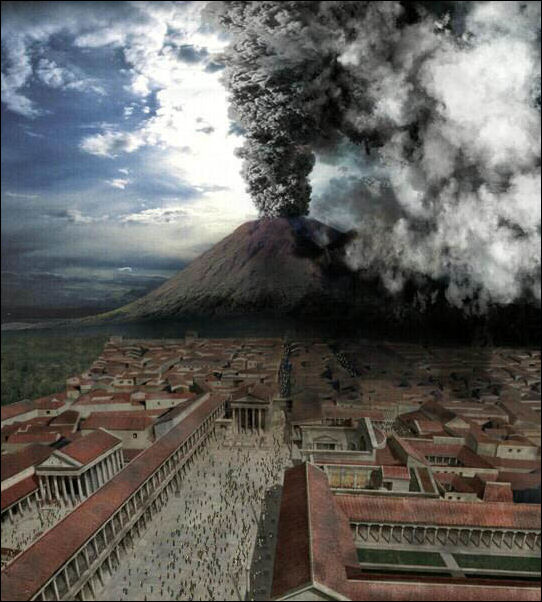 Those who stayed inside found that the 11 hours of non-stop pummeling by volcanic debris caused an accumulation on the roofs, which were now collapsing. They sought to take valuables from their homes and make their way out of the city, yet this was becoming arduous as ash was accumulating on the streets at an incredible rate of 6 inches per hour.

At dusk, 90 percent of the population of Pompeii had reached safety, but they had no idea what would happen next.

There would be more life and death decisions for those who had survived the first day as the mountain which had become a volcano was not finished.

In the Shadow of Vesuvius

Pompeii: A Novel by Robert Harris

The Fires of Vesuvius: Pompeii Lost and Found

Next Up: Pompeii – The Last Days Part II

Ann Pizzorusso is a geologist and Italian Renaissance scholar. After many years of doing virtually everything in the world of geology (drilling for oil, hunting for gems, cleaning up pollution in soil and groundwater) she turned her geologic skills toward Leonardo da Vinci. See her work on Leonardo’s Geology. You can find Ann on Facebook at Leonardo da Vinci Virgin of the Rocks and on Twitter @VirginoftheRock.