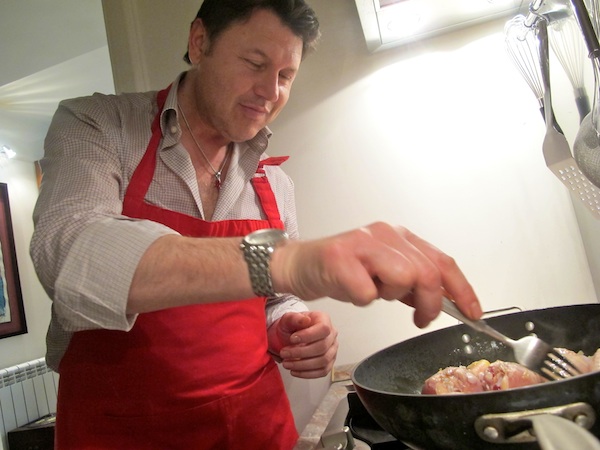 From the Italian word for hunter, by now I’m sure you know that Pollo alla Cacciatora or Chicken Cacciatore simply means chicken made in “hunter-style.”

Cacciatore – hunter, cacciatrice – huntress, cacciatora – in the style of.

At least I assume.

This got me to wondering though. I’ve always thought of Neapolitans as gatherers, but were they ever big hunters?

They have a long history with the sea which still provides a diet rich in clams, mussels, octopus, squid and a variety of white fish. The olives, grapes and lemons that are grown all over the region produce some of the world’s best wines, olive oils and of course the world famous limoncello. And fresh fruits and vegetables like tomatoes, figs and artichokes thrive in the fertile Vesuvian soil.

But Neapolitans as hunters was something I’d never given any thought to before, though I’m sure at one point in time it was part of the culture. Up above Piazza Carlo III there is a villa, Villa di Donato that was an 18th century casino di caccia, a hunting lodge that served the residents of Capodimonte Palace.

What they hunted for I don’t know, but I’m guessing rabbit might have been on the list. In fact, here in Naples you are just as likely to see Cacciatora made with coniglio, rabbit as you are with chicken. A meat I am still trying to warm up to, it is the star of a dish from Ischia known as Coniglio all’Ischitana that is made from local rabbit I’m told is like none other.

As I’m sure you know, Naples doesn’t own the market on Cacciatora, be it made with rabbit or chicken. You will find it in all manners and sorts of variations throughout Italy.

So what sets this the Neapolitan version apart?

The flavor it produces in it’s simplicity. Something magical happens when the chicken, tomatoes, white wine, and peperoncino are combined and braised slowly on the stove. The result? A spicy, sweet, savory sauce, and chicken, or rabbit as the case may be, so tender it falls off the bones. 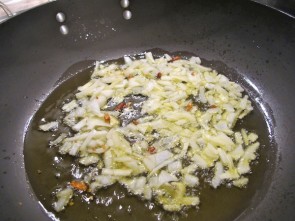 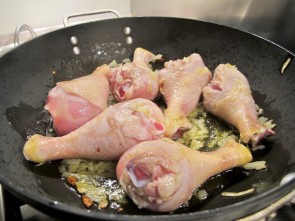 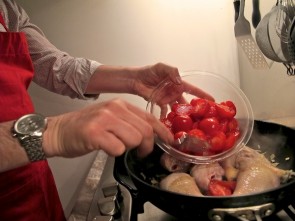 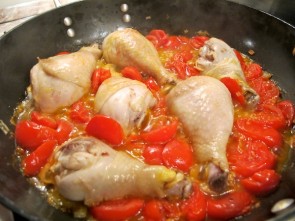 Chop the onion and halve the tomatoes
Lightly salt and pepper the chicken on all sides
Heat a generous amount of oil in a large, deep frying pan
Add onions and lightly sauté
Break up the Peperoncino with your fingers into the onions and stir through
Add the chicken and lightly brown it on all sides
Add about 1/2 cup of white wine
Turn the heat up until the wine nearly completely reduces, turning the chicken once or twice
Add the tomatoes and lightly salt
Turn the heat to medium-low, cover and cook about 35 minutes until the chicken is done
Stir occasionally while the chicken is cooking and add water as needed to prevent the sauce from reducing too much