When his slave broke a crystal cup, Publius Vedius Pollio condemned him to death, insisting that he be dropped into a pool of moray eels. Pollio’s friend, Emperor Augustus, told the self-made ga-gillionaire to spare the slave’s life. Augustus then ordered all Pollio’s expensive drinking vessels smashed and his pool filled in.

Pollio was described as a cruel Roman knight of the equestrian order. He was also so wealthy that he owned a private grotto 770 meters long. People and horses could pass through the tunnel by invitation only, which led to his villa perched on a cliff. Inside, he had his own amphitheater for gladiator fights as well as an odeon for theater spectacles. After Pollio’s death, the notorious minister of Tiberius, Sejanus, bought the villa. Hence, today the long tunnel is known as the Grotta di Seiano. 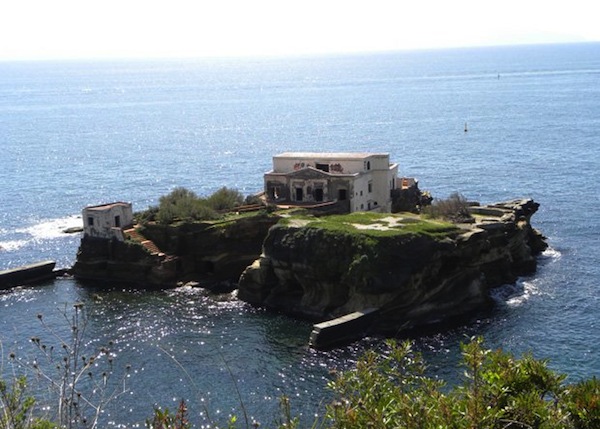 While walking down the grotto, three corridors provide ventilation. One corridor has a hallway of old toilets that people used during WWII when this tunnel was used as a temporary bomb shelter. The main tunnel ends at a pathway filled with vegetation that curves over to a massive villa, known as Pausilypon, which means a respite from toil or pain in Greek.

Publius Vedius Pollio’s ruins are well-preserved. Broad steps take visitors up to what could have been a suite of bedrooms overlooking the sea. The kitchen downstairs still displays the original slabs of red marble against the walls. While the villa sits on a cliff, it can’t be seen from any angle within the city or by boat – its construction craftily tucked into the mountain.

Behind the villa, another pathway meanders to an outlook point where three small islands dot the water. On one island, an eighteenth century villa sits abandoned. Legend has it that the owners left during the twentieth century because it was haunted by ghosts. Other folklore says that a woman lived there in complete solitude for many years until her death and the villa remained uninhabited thereafter. 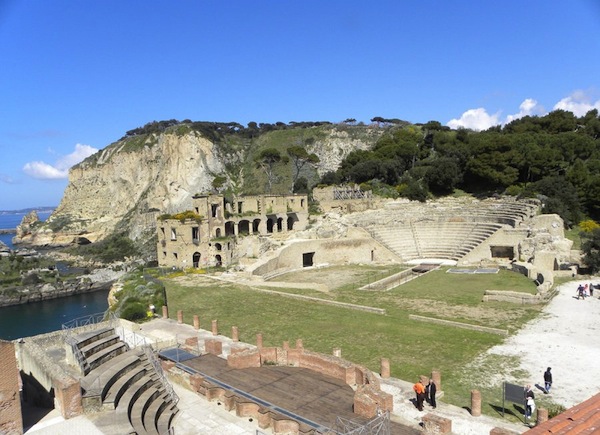 Visit the Pausylipon Archaeological Site and the Seiano Grotto