From Neapolis to New Jersey: genealogy of a lyrical alchemist 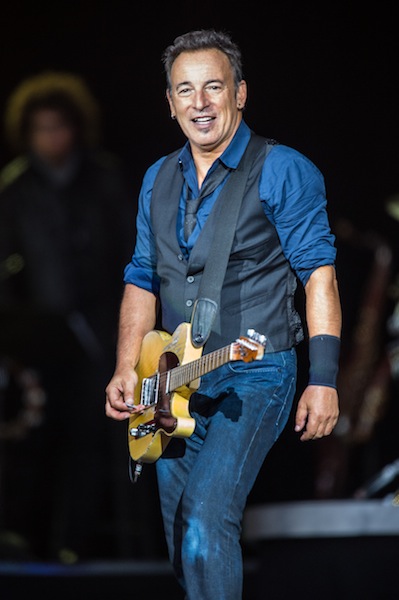 There is a crystal clear connection between Bruce Springsteen’s Melancho-Rock and Neapolitan music, language and songs. Also, and maybe even more importantly, a semiotic bliss derived from a pyrotechnic New Jersey pathos imbued dexterity and the echo of the myth exuding romantic chants of the most glorious Campania Felix.

Between the Boss and Naples inhabits a perennial river of hearts and souls spanning thousands of miles across all the oceans with one of its fundamental springs to be found in Vico Equense, on the bay of Naples, where Springsteen’s (maternal) grandfather was born and lived until he decided to leave his native land.

Grandad Antonio moved from Vico Equense to the States with some truly sour dough in his pockets and a few dream brim filled cases. Unable to read or write, he went on working hard until he graduated and eventually became a lawyer. Antonio then married Adele Sorrentino, who had crossed Ellis Island at the age of 28, though remaining eternally attached to her Neapolitan language. Adele never learned a word of English: a perfect example of American assimilation, as the Boss himself puts it whilst receiving the Ellis Island Family Heritage Award in 2010:

Springsteen himself must have known how his songs owed a lot to his grandparent’s voices echoing Parthenope’s ever approaching laments. A linguistic metempsychosis, an evolution transmuting human genes into ripped jeans. Or maybe even one of those transatlantic cases of musical synchronicity that would justify the Boss’s archetypical opera and his absolute domain over his adoring audiences.

Bruce knew that he owed something special to Grandma Adele, to that sweet lady who never learned a word of English through her entire life and stay in the States. And the little boy, now 64, wanted to honour her, her roots and his own too by speaking a little Neapolitan in his intro of “My Hometown” during his concert in Piazza Plebiscito in Naples last summer: “Vulesse dedica’ chesta canzone a… “I would like to dedicate this song to…”

In a perfect Neapolitan accent: evidently and eminently bequeathed to their grandson by Grandpa Antonio and Grandma Adele, who settled their dreams by the consecrated sands of New Jersey so that their grandson’s Rock mission could finally set sail.

About Massimiliano Canzanella: I am a writer and I am the proud author of the first novel written in Neapolitan. I currently live in Scotland where I work as an English Teacher in a Secondary State School.

You can find out more about my activities concerning the Neapolitan language via my Facebook page:

Napoli Unplugged is very fortunate to have a diverse group of guest writers who share their unique perspectives with us. Writers that let us see the city through their eyes, live vicariously through their experiences. If you’d like to share your experiences in Napoli email us at info@napoliunplugged.com