Operated by ANM, Naples Metro Line 1 was originally built to connect the city with the hill districts of Vomero and Colli Aminei and was known as the Hill Metro or Collinare. Today, Naples Metro Line 1 connects the city center with the northern district of Piscinola and is known as Metro dell’Arte for the contemporary works of art that have been installed in many of its stations. MetroNapoli has also installed art works in its Line 6 stations.

A major expansion of Naples Metro Line 1 has been on going for a number of years. Forming a complete ring, the line will continue from Piscinola to the Capodichino Airport, Centro Direzionale, Piazza Garibaldi and return to Piazza Dante via  Piazza Municipio where it will connect to Naples Metro Line 6.

The Piscinola to Capodichino link and the Piazza Dante to Piazza Garibaldi sections are currently under construction. MetroNapoli opened the Università Station at Piazza Bovio in May 2011 and the Toledo Station in September 2012 along the section linking Piazza Dante with Piazza Garibaldi. Stazione Garibaldi, the latest opening, has been operating since January 2014.

See the ANM Timetable for more information. A Unico Napoli TIC Ticket, or an ANM ticket is required on all of Naples Metro lines. 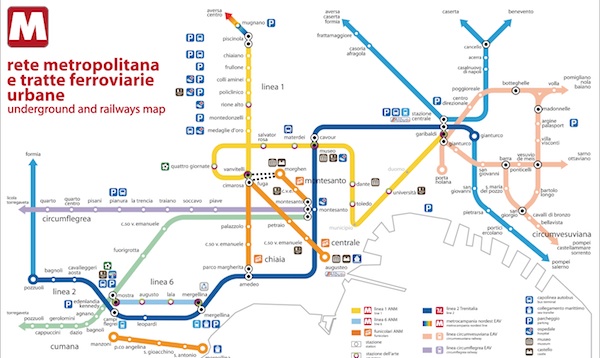