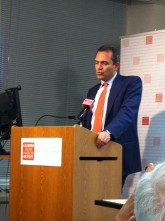 It was a very special night at the John D. Calandra Italian American Institute of the City University of New York.  Was it because of the energy that the mayor of Naples, Luigi de Magistris brought across the Atlantic, along the 41st parallel, straight to the Big Apple? Probably so, as both cities are electric, eccentric, controversial, full of things you either love or hate, but in the end they are both one of a kind.

Mayor de Magistris was wrapping up his tour of New York, but his visit was not the superficial, pizza, pasta, O’Sole Mio tour. When he spoke to us, he talked about what was really on his mind: a world in which money and goods flowed freely across borders, but people can’t. He issued a broad appeal for changes in legislation and much more compassion for the plight of displaced people and refugees. In fact, he has instituted a number of initiatives in the City of Naples to help those immigrants who need support.

He also presented a number of new international programs which should give the visitor more pleasure and more reason to visit this fabulous city: Wedding In Naples, a destination wedding service, NapoliMovieTour, a mobile app that guides you to the most famous and often hidden places in the city, its historic center that has been declared a UNESCO World Heritage Site, and last but not least there is Napoli Unplugged, which can keep you continuously updated. 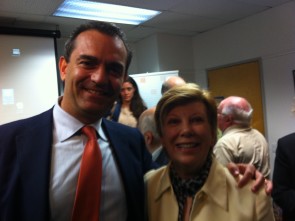 Together with the mayor was Monsignor Gennaro Matino, a professor, author and creator of a cultural exchange project called Naples in the World which will serve to provide an innovative platform for talking about Naples. 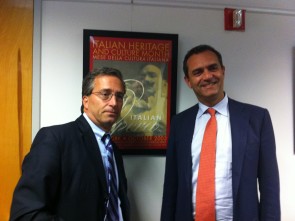 The mayor and the monsignor were also joined by Professors Anthony Tamburri, Fred Gardaphe and Robert Viscusi. Professor Stanislao Pugliese gave a brilliant lecture which overflowed with tidbits on Naples and the Neapolitans. Everything from calico to lotto to pizza to Enrico Caruso to Giambattisa Vico to Vesuvius was presented in a rapid-fire sequence, representing the never ending stream of accomplishments and interests that the Neapolitans have and will continue to create.