It has been said that Naples is set around the waters of the Bay like a great amphitheater. The Bay, with Vesuvius, Capri, Ischia and the Sorrentine coast in the distance, the arena upon which all eyes rest. The city’s terraced hills, the tiers upon which palazzi rest like expectant fans, awnings extended over their balconies like the great velarium that once protected spectators from the sun. And the stairways, carved into the terraces at varying intervals, climbing up each and every tier of the amphitheater from the arena floor to the very top.

They go by many names: rampe – a ramp or flight of stairs, gradini – steps,  scala – stairway,  salita – a slope, rise or ascent, discesa – a descent,  calata – also a descent. Different terms that are used to name individually, what are collectively known as le Scale di Napoli.

Think the Streets of San Francisco Napoli style. As much a part of the character of the city as the ancient alleys of Centro Storico or Vesuvius looming in the Bay, le scale have enchanted me since I saw my first one shortly after I moved to Naples.

I didn’t know what it was at the time, nor did I know I had only walked down the lower half of it. All I knew was that after a morning wandering the city in parts unknown, I could see the US Consulate in the distance and from there I knew my way home. 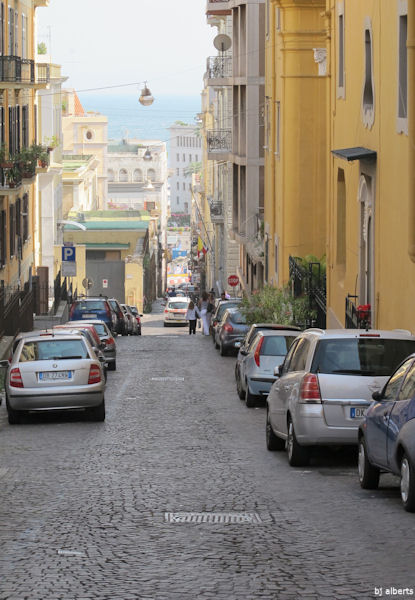 The US Consulate in the distance on the far right

I would learn later that it was part of  Calata San Francesco. One part stairs, one part rise or fall depending on the direction you are headed, I have walked various portions of it over the years. It wasn’t until earlier this week however that I finally made the journey in full. 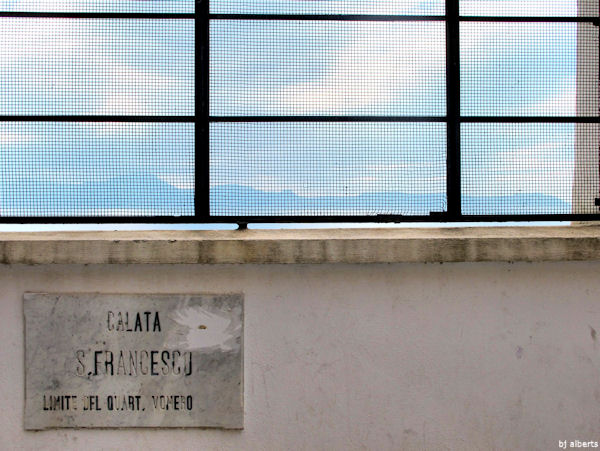 Starting at Via Belvedere in the Vomero, Calata San Francesco ambles down Vomero hill to Riviera di Chiaia at Piazza della Repubblica. Had I been really adventurous I would have started my journey there. Instead I chose the descent, taking the Chiaia Funicolare up to Vomero and a short walk to where it starts at Via Belvedere.

According to Google maps it would be a 1.3 km or 15 minute walk. It would be more than an hour however before I would emerge at Riviera di Chiaia.

The first part of the walk is a stairless descent. Narrow, but wide enough for cars to park on one side and sometimes both and it’s not terribly steep, relatively speaking of course. 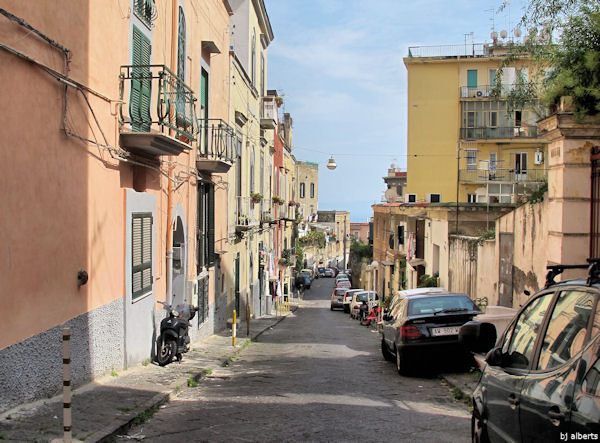 This stretch ends at Via Aniello Falcone. Crossing the street to continue on, Calata San Francesco looks like an entrance to a private parco. And in fact, this kept me from continuing down the first few times. 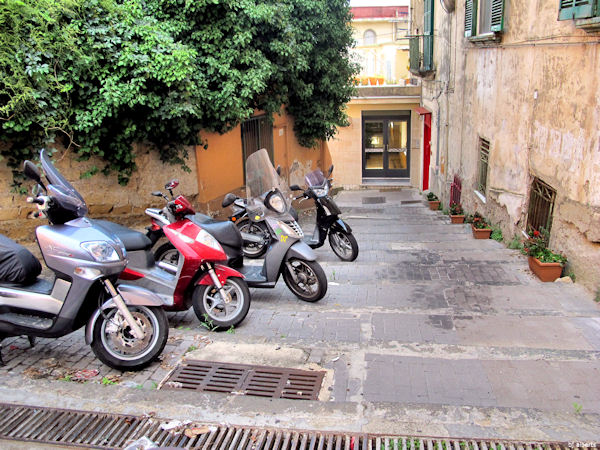 But sure enough, turning left at the bottom of the first set of stairs, the calata reveals itself. 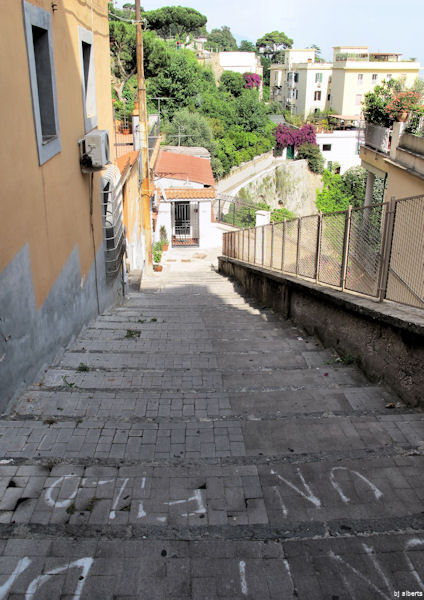 My favorite part of the journey, Calata San Francesco zig zags down a series of steep stairways until it reaches Via Tasso where it changes name to Salita Tasso. 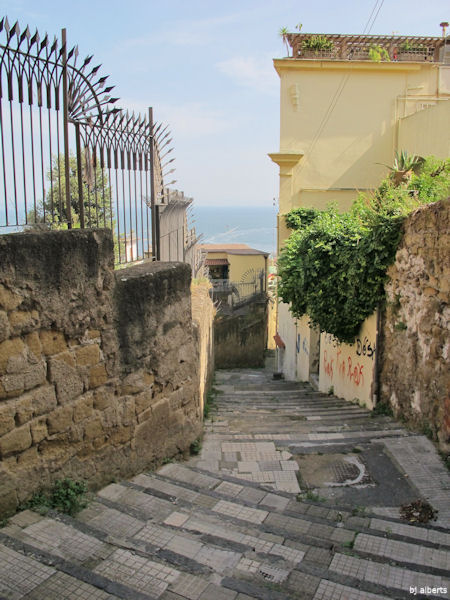 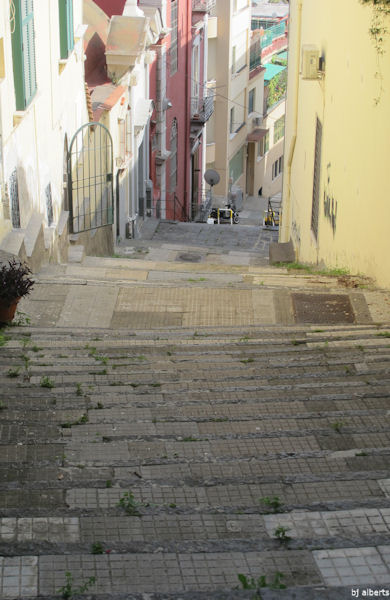 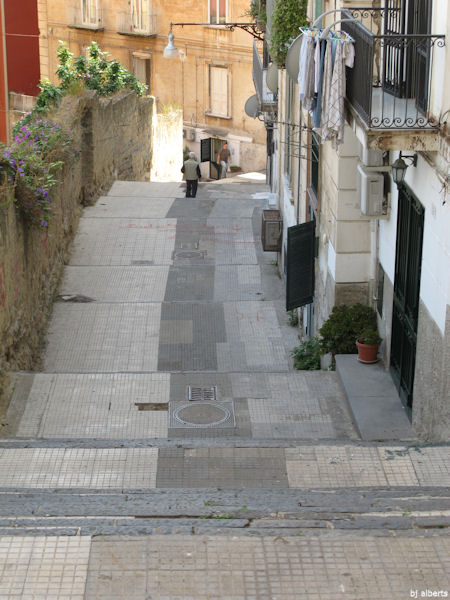 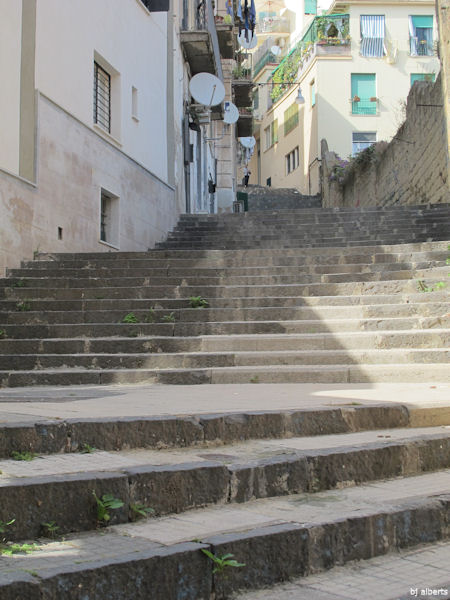 From here Salita Tasso becomes Via Arco Mirelli and it is terra firma, albeit a steep and slippery slope all the way to Riviera di Chiaia. 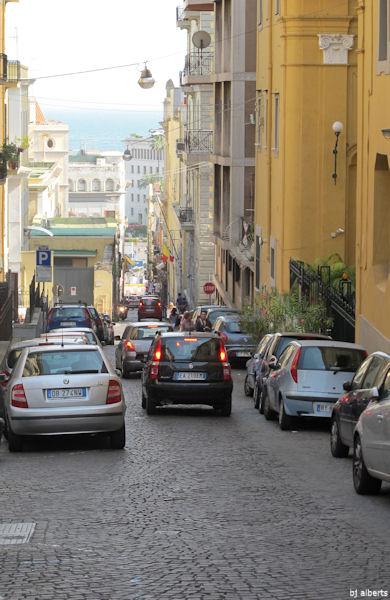 This final section is not for the faint at heart. It is fairly narrow, has a high amount of traffic and precious little walking space. In fact, I was only able to snap a few pics before I about lost my camera (and my hand) to a car whizzing by and I decided to call it a day.