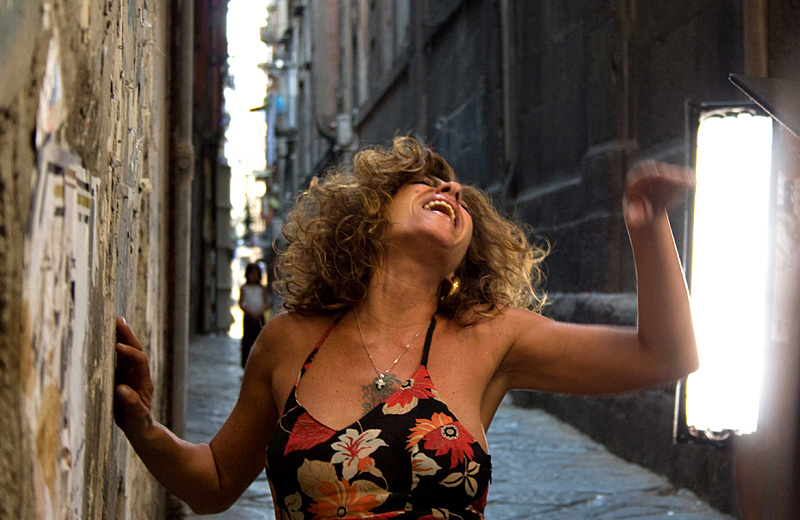 There are places that you go to, and once is enough.
And then there is Napoli.
John Turturro, Passione.

The long-awaited stateside release of John Turturro’s Passione made its debut at New York City’s Film Forum on June 22nd to rave reviews. It’s been so successful in fact that it is being held over until July 14th with six showings a day. A limited release, Passione opened at the West End Cinema in Washington D.C. on July 1st and will run through July 14th. The remaining show dates include:

If you are near any of these locations, this is one movie you don’t want to miss. In a word, it is simply stunning. “A musical adventure” that started out as a documentary about Canzone Napoletana – Neapolitan Song, John Turturro says “transformed into a wild fantasia, an adventure into the vibrations of history.”

And how it could it not?

A musical tradition born in a city that is nearly as old as civilization itself. The original melting pot as John Turturro says, the Neapolitan people are the product of the layering and blending of the many cultures who have dominated and been dominated here. The music, an expression of the Neapolitan experience.

An experience that in stark contrast to the beauty of the city and its calm blue sea has endured life at the mercy of a revolving door of political regimes, oppression, racial discrimination, and periods of intense poverty, crime, and corruption. This coupled with natural and manmade disasters – plagues, earthquakes, volcanic eruptions, and the relentless bombing of the city during WWII have damaged the city but have never destroyed the unwavering spirit of the people.

A spirit that brings to the music the full range of human emotion in all its contradictions and that is from a place so deep, experiences so profound, the music literally reverberates from the depths of the Neapolitan soul.

And John Turturro’s Passione has masterfully captured and preserved this intangible piece of Neapolitan culture, exposing to the world a rich musical heritage rarely known outside of Naples and Italy.

From the first song to the last you are immersed in the cadence of the rhythmic Neapolitan language, lingua napoletana – the Language of the People. Captivated by the sometimes haunting, sometimes intense, sometimes melancholy music with its deep Middle Eastern, North African and Spanish influences.

“Singing to the entire City,” Passione opens with Mina’s rendition of the Sergio Bruni classic Carmela. It closes the only way it could, with what has become the Neapolitan Anthem, Pino Danielle’s tribute to his beloved city, Napule è. In between, Turturro’s musical vignettes interspersed with interviews and commentary take us on a musical journey of the city.

Drawing from an enormous archive of Canzone Napoletana, Turturro selected 24 songs dating from the 13th century to present to tell the Neapolitan story. Paying homage to the Neapolitan classic ‘O Sole Mio, Turturro created a musical montage with recordings from Sergio Bruni (1921 – 2003) and a young Massimo Ranieri, ending the song with a rendition by Tunisian M’Barka Ben Taleb.

And, Turturro introduces American audiences to Tammurriata Nera. Written in 1944 by E.A. Mario (music) and Edoardo Nicolardi (lyrics), it recounts the story of a woman who gives birth to a child of color conceived during the WWII American occupation of Naples.

Performed by Peppe Barra, Max Casella and M’Barka Ben Taleb, Tammurriata Nera is one of the most powerful songs in the movie. It is also the life story of Neapolitan Saxophonist James Senese who performs the movie’s title song Passione, and who is the child of a Neapolitan mother and an African-American GI Senese has never met.

With a cast as diverse as the music, Turturro takes us from the heights to the depths of the city. A journey to forgotten landmarks, hidden corners and through some of the most characteristic neighborhoods in Naples.

From the San Martino Charterhouse atop Vomero hill where Spakka- Neapolis 55 performs Vesuvio to Piscina Mirabalis, an ancient Roman cistern in the Province of Naples that is the stage for the 13th Century Canto delle lavandaie del Vomero.

But his showcasing of the Rione Sanita neighborhood is what resonated with me most. One of Naples poorest but most beautiful neighborhoods, the renowned Palazzo dello Spagnolo was the backdrop for Pietra Montecorvino’s performance of Comme Facette Mammeta – How Your Mama Made You while the market on Via dei Vergini was the stage for Dove Sta Zazà.

In the end Passione is more than a “fantasia,” more than a tribute to a musical genre. It is an ode to Bella Napoli and a celebration of the heart, the soul, the spirit of the Neapolitan people.