Ischia – Growing Up Is Hard To Do 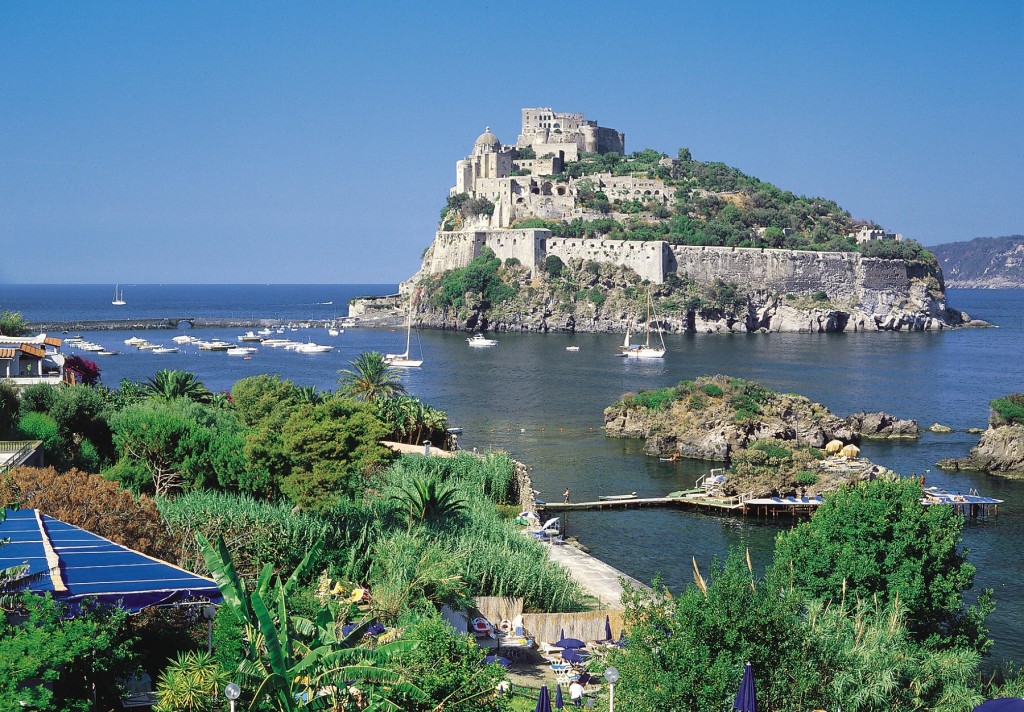 Ischia was like the ugly duckling that grew into a beautiful swan. It is the baby of the Gulf of Naples, being born a nanosecond ago as far as geologic time goes. It was also a colicky baby: bubbling, boiling, churning and spewing. And then, when all this turbulent activity stopped in 1302, it calmed down, became lush and fertile, the thermal waters and mud gently bubbled up from the ground and the island was transformed into paradise. 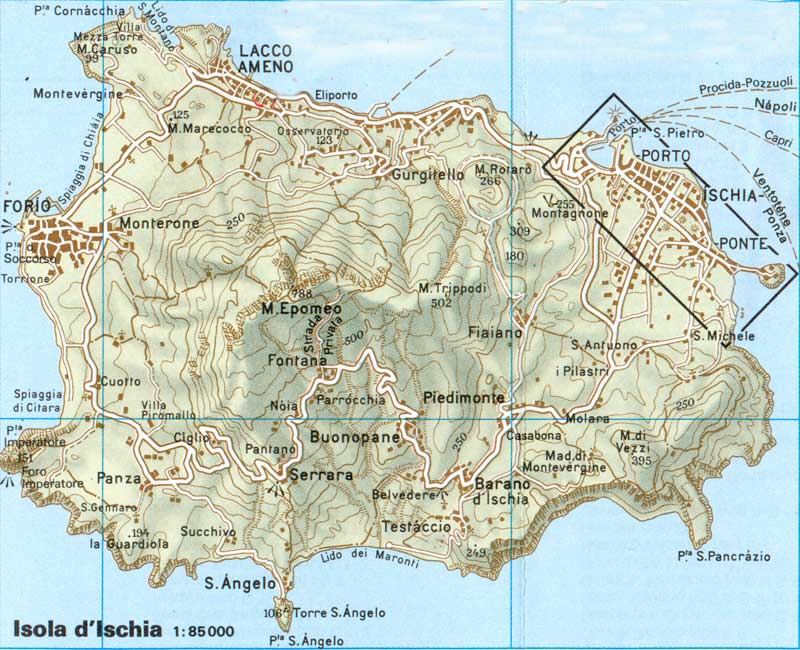 Ischia was the first Greek settlement in the west. Euboean Greeks settled on Mt. Vico, a lava dome located above Lacco Ameno in 770 B.C. They originally called the island Pithecusa, a name whose meaning is much debated.  Some say it is because of the type of vase once produced there, the pithol, while others say that monkeys once lived on the island and they were called pithecantropus. Regardless of the origin, the Greeks used Pithecusa as the starting point for expansion in the west, going next to Cuma and then moving on to Naples, Magna Grecia and Sicily.

Despite being the first settlement of the Greeks in the west, and invaded for millennia, the renowned Neapolitan archeologist, Amedeo Maiuri announced in 1930 that “Ischia is still completely unknown.” As we know, that is no longer the case as Ischia, sitting at the western entrance to the Gulf of Naples, is now an international tourist mecca.

The origin of Ischia can be explained by myth or geology, so I’ll tell you both. It seems like a veritable who’s who of Greek and Roman poets and commentators such as Virgil, Homer, Ovid, Statius, and Lucan, to name a few, described Ischia as having been home to giants. One in particular, named Typhon (Tifeo or Tifone), was the monstrous son of Gaea (goddess of the earth) and Tartarus (god of the underworld). With parents like this, guess what he looked like?

Well, it seems that he was one of the personifcations of vulcanism since flames gushed from his mouth (I guess he got that from his father’s side) and he also had a hundred dragon heads under his arms and coils of vipers under his thighs. I’ll stop here, you get the picture. Typhon also seems to have been a bully of sorts, challenging Zeus to a battle, and amazingly enough, almost winning by cutting through the sinews of Zeus’ hands and feet so he couldn’t defend himself by throwing thunderbolts. Fortunately, Zeus’ son Hermes came to his rescue and Zeus killed Typhon and buried him beneath Ischia. Unable to endure this humiliation, he struggled to free himself. His movements under the island caused tremors, earthquakes and  flames, fire and boiling water and mud to spew from the volcanoes on the island. Let’s just say Typhon was not a gracious loser. 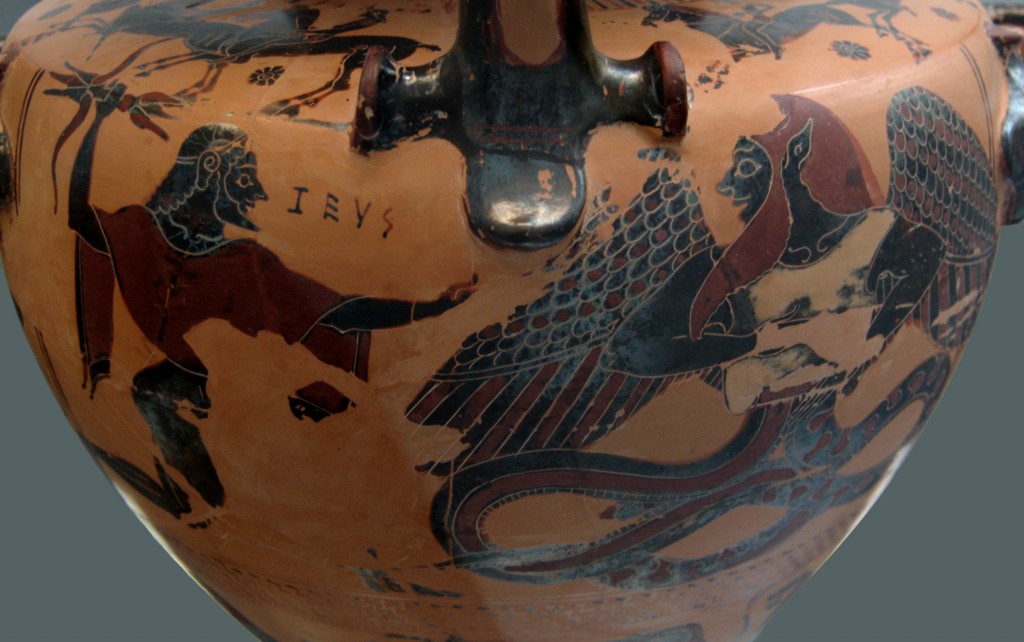 So there, now you know the mythologic origin of the island. Actually, it reflects the geologic origin pretty well.

Ischia was formed by a complex volcano (volcano with more than one feature) and born in distinct phases. The southeast side is the oldest, dating to 150,000 years ago. A fault extends through that corner of the island all the way to the Campi Flegrei. On this fault five volcanoes are found, all in a straight line centered on the fault line. On the other side of the fault line the oldest part of the island is 55,000 years old. 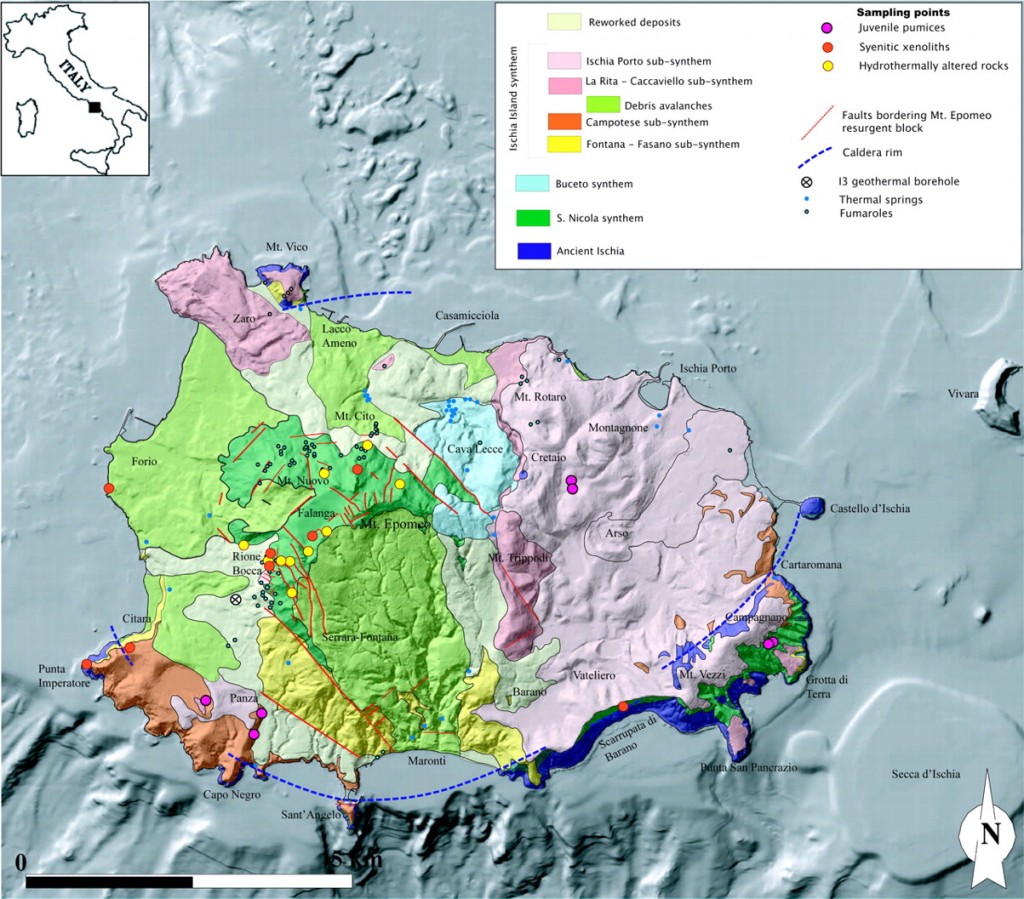 Oldest part of Ischia in cobalt blue to the southeast. The dotted blue line indicates the ancient initial crater that formed the island. A fault cuts across the southeast from near Mt. Vezzi toward Castello d’Ischia. Five volcanoes are located along the fault.

After Ischia’s violent birth, the Campanian volcanic eruption of 39,000 years ago, centered at Pozzuoili, sank much of it, including Mt. Epomeo. Contrary to popular belief, Mt. Epomeo, which covers about 35 % of the island, is not a volcano. The green tuff of Mount Epomeo (Tufo Verde di Monte Epomeo) from which it is made, lay underwater and marine clays were on top of it. This was resting on top of a magma chamber which, upon filling up, thrust the layer of tuff and clay high out of the water. With subsequent tectonic (uplifting, mountain building) activity, this layer then split into a number of wedges due to force of the uplift. The wedge (horst) which is now known as Mt. Epomeo was thrust up the most (789 m, 2,600 ft.) and the other wedges nestled beside it with different, lower elevations. The edges of the wedges are separated by faults, through which flow gases and vapors and the thermal waters for which Ischia is famous. 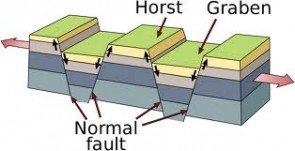 Mt. Epomeo is an example of a horst. Gases and thermal waters are emitted from the faults surrounding it. 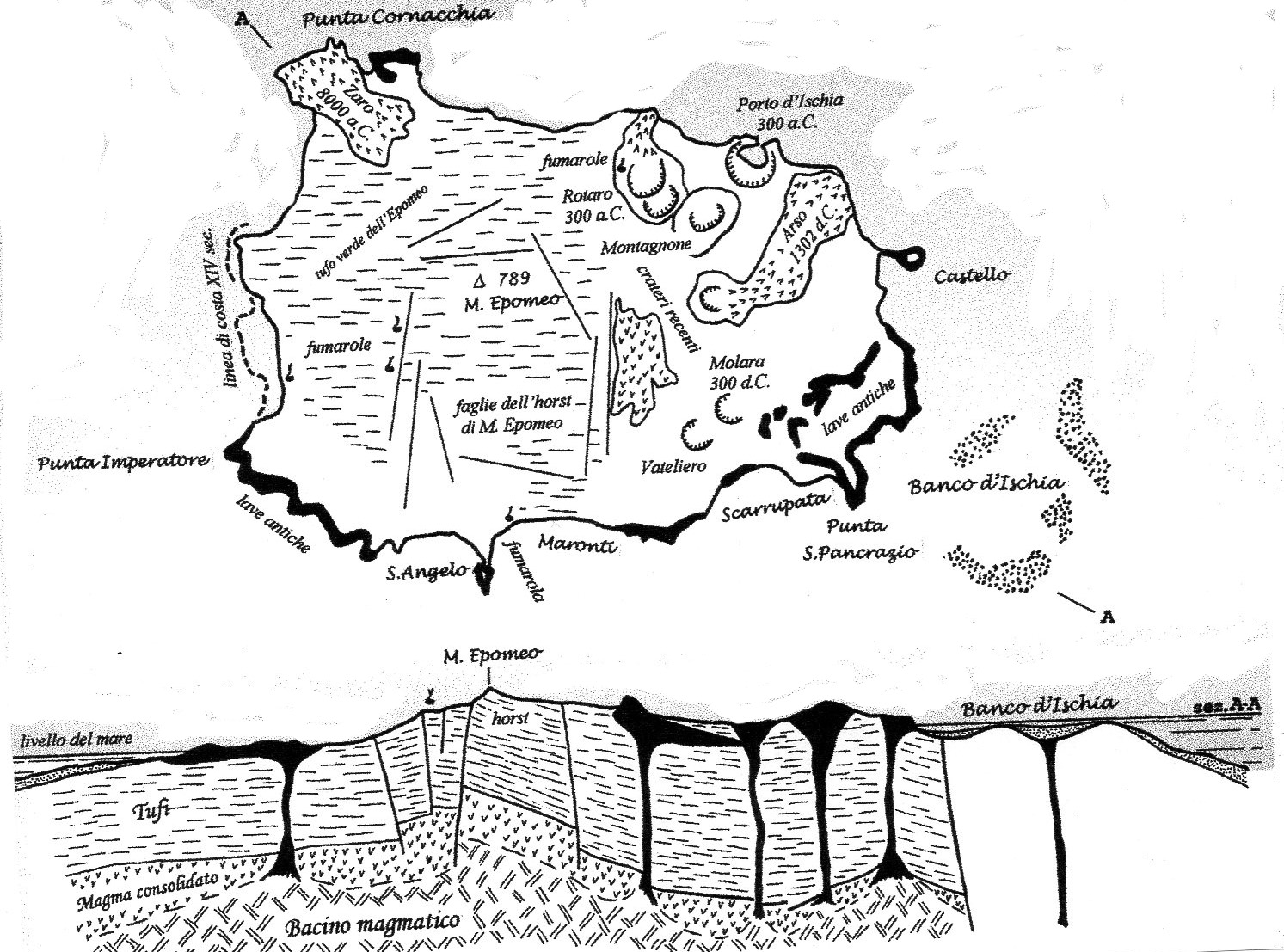 Geologic cross-section showing the magma chamber underneath Mt. Epomeo which pushed it up and cracked the surrounding strata resulting in wedge shaped blocks, horsts and grabens, divided by faults from which flow thermal waters and fumarole vapors.

The original settlement of the Greeks was at Lacco Ameno, and many super important archeological finds have been preserved in the local museum at Villa Arbusta in the center of town. The most important of which is the Cup of Nestor, dating from 730 B.C. and discovered in a grave in 1953. It is one of the most important examples of the early Greek alphabet and has the oldest written reference to the Iliad inscribed on it. 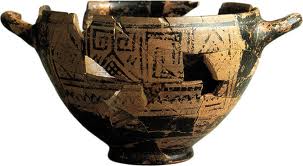 The clays of Ischia, located near Mt. Epomeo were famous in ancient times for their high quality and were traded throughout the Mediterranean. In a collaboration between geologists and archeologists (geo-archeology), scientists are chemically analyzing Ischia’s clays. Then, analyzing ceramic pot shards, scientists can determine if the clay came from Ischia. Prof. Celestino Grifo of the University of Sannio in Benevento has been involved in this exciting research. Sort of like DNA for clay. The results can show where the clays were transported, how they were used and who were Ischia’s trading partners. It can also solve the mystery as to whether the Etruscans brought shiploads of iron from Elba to trade for Ischian clay. Extensive metallurgical activity was ongoing on Ischia in Roman times. So much so that the Romans renamed the island Aenaria (from the Latin aenum, bronze or metal in general), yet no metal deposits are found on Ischia. Where did the metal come from?

It seems that geologic events actually caused the Greeks to move from Lacco Ameno to Cuma. At that time, 750 B.C., the island was still very active and volcanoes were bubbling away. The Greeks thought they had selected a nice place on Mt. Vico in Lacco Ameno overlooking a bay. Then one day in about 700 BC. the bay disappeared and a new volcano, Mt. Rotaro emerged from the water. Supposedly this proved too much for the Greeks and they transferred to Cuma. While there is no proof that this is the reason they settled in Cuma, the geologic facts are accurate. If this actually was the cause, this would not have been the first time Ischia’s volcanic activity proved too much for settlers. As a matter of fact, in contrast to surrounding areas, Ischia’s history of habitation is very recent, going back just 5,000 years as opposed to tens of thousands of years in the surrounding areas. To add insult to injury, the Romans tried to live there and couldn’t stand the volcanic activity. The Emperor Augustus decided to trade Ischia to Naples in 6 B.C. and take Capri in trade. He found the non-volcanic island of Capri much calmer.

Next up – Ischia Geologic Wonderland