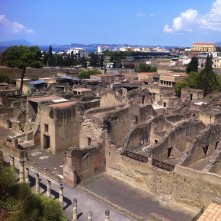 Like Pompeii, Herculaneum was lost when Vesuvius erupted in 79AD, however, while Pompeii was covered in ash, Herculaneum was covered in mud which solidified and entombed the city. Though it has been much harder to excavate – only ¼ of the site has been unearthed so far – the ruins are generally better preserved. Even wood materials have survived (see the House of the Wood Partition), as have a number of  second stories.

A selection of artifacts are on display at Naples National Archaeological Museum. Hundreds of ancient papyrus scrolls were also found and today, they are housed in Naples National Library, the Biblioteca Nazionale.

Allow at least a few hours to visit the excavation site. Stop by the nearby MAV, the Virtual Archaeological Museum after and add a trek up to Mt. Vesuvius for a full day excursion.

Herculaneum’s continued conservation and enhancement is owed to the Herculaneum Conservation Project. Founded in 2001 by the the Packard Humanities Institute headed by David W. Packard, since 2004 they have partnered with the British School at Rome.

The excavation site sits below the present day town of Ercolano and is easily reached by car. There is a large paid parking lot right outside the gates. Alternatively, take the Circumvesuviana train (Sorrento line) to the Ercolano Scavi station. The ruins are a just a ten minute walk down the hill.

Explore the site with the aid of a map and information booklet available at the ticket office or you can download a copy here. An audio guide is available for  €6,50.