The impressive and yet out of the way Grotte di Pastena is about eighty-five kilometers north of Naples. If you drive to the city of Formia, signs for the grotto begin along the road, but beware: the signs don’t mark the number of kilometers to the destination, taking you instead into endlessly winding and mountainous roads.

An hour’s drive later amid beautiful views of valleys and lush vegetation, the signs lead to a gravel parking lot replete with a restaurant and souvenir shop. The entrance to the grotto is at the end of the parking lot and a concrete pathway leads down a hill to a rock opening with shades of copper and mossy green. 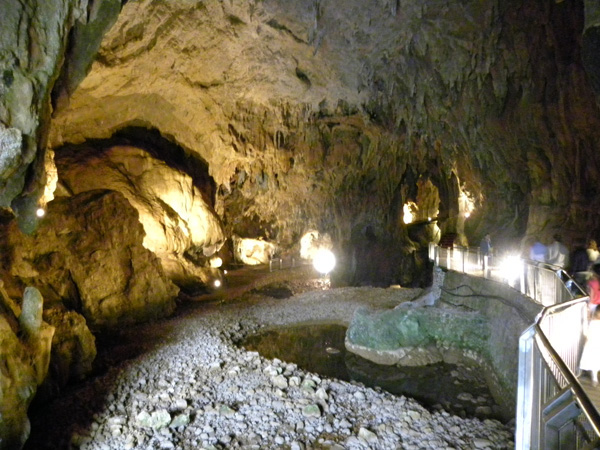 The grotto system measures 2,127 meters long and is actually a huge river cave. The river drains into the cave from the valley, creating a sinkhole.

The tour begins in a chamber, where you can see small blue lakes and water streams. Stalagmites rise from the floor and stalactites hang from the ceiling of caves, which form through the dripping of mineral-saturated water.

The echo of running water persists throughout the tour accompanied by the sound of squeaking bats. As you walk deeper and deeper into the cave, a path takes you to a sheer dark cliff on one side and turns down into another tunnel, leading into a dark grotto. Here, impressive stalagmites scatter up a hill until dirt meets the rock above. Bats fly all around and a large black mound of bat excrement towers in the middle, prompting most tourists to comment: “Eeew.”

Getting There: Either follow the signs from Formia for the scenic route or drive along the A1 either from Rome or from Naples until you see the signs to the Grotte di Pastena. The address is Via Porta Napoli, Pastena.