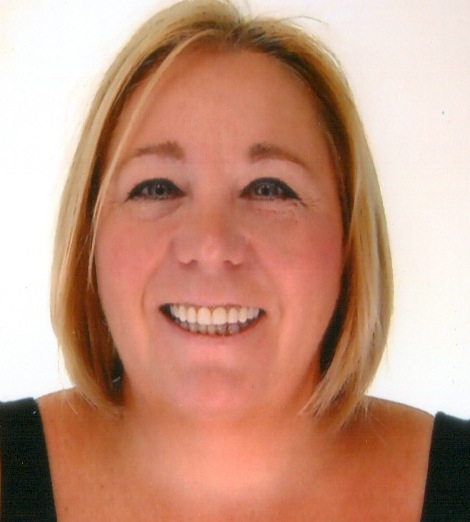 I completely missed writing the post last month and this month, I almost missed that too. Didn’t I come here to live “la dolce vita”??? You know what they say, no matter where you go, there you are. And as it would happen, I packed my workaholic self in the suitcase when I moved here and although it didn’t get unpacked right away, every year since, more and more of it has been able to seep through the zipper.

I was in NYC at the end of May (thus my lapse) presenting the NU Guide to Naples at BookExpo America & BookCon and picking up a 2015 Gold IPPY Award. Anyway, lets just say, things were hectic at best and from start to finish, they didn’t go exactly to plan and in the end it would seem, I left NYC a day early and a dollar short.

Just a few hours after booking my non-refundable flight out of the “Big Apple”, I got emails from several friends of mine letting me know that the Sindaco, the Mayor of Naples, Luigi de Magistris would be in NYC making his reciprocal visit to NYC’s Mayor Bill de Blasio. The dates that were being bantered about all started with June 4th, the day I was to leave NYC. 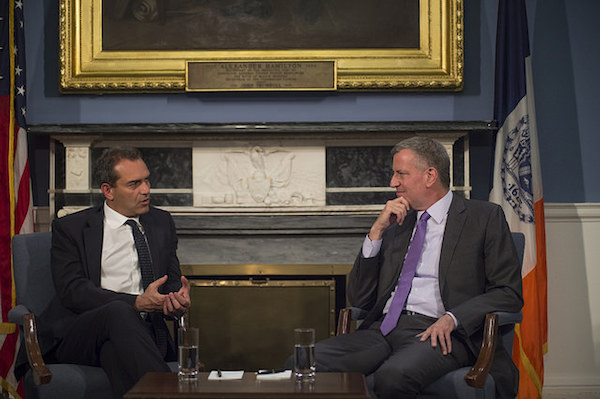 The Mayor’s whirlwind tour actually started on the 3rd and by the time it was done he had toured Little Italy, helped make a ball of mozzarella, made his pilgrimage to Ellis Island (not to mention Eatlay and Rossopomodoro), met the Italian-American Chamber of Commerce and the Italian Trade Commission, sat down with Mayor Bill de Blasio and at just about the same time I touched down in Virginia on the 4th, he was starting his speech to a SRO crowd at L’oro di Napoli: All That Glitters Is Gold! a Symposium on the Splendors of Naples, at the John D. Calandra Italian American Institute (CUNY).

Luigi De Magistris will be the guest speaker at a symposium dedicated to the experience of emigration and immigration in Naples and New York – two inclusive cities par excellence. Discussion will focus on the changing destiny of Naples, from port of departure for great waves of southern Italian emigration to a city that today receives immigrants from the southern part of the world.

It was a conference I was despearate to attend but destined to miss. Luckily, our resident geologist Ann Pizzorusso, whose Tweeting Da Vinci just won Foreword Reviews’ 2014 INDIEFAB Book of the Year Gold Medal for Nature was still in NY and was able to attend. She promises to tell us all about it in her next post. 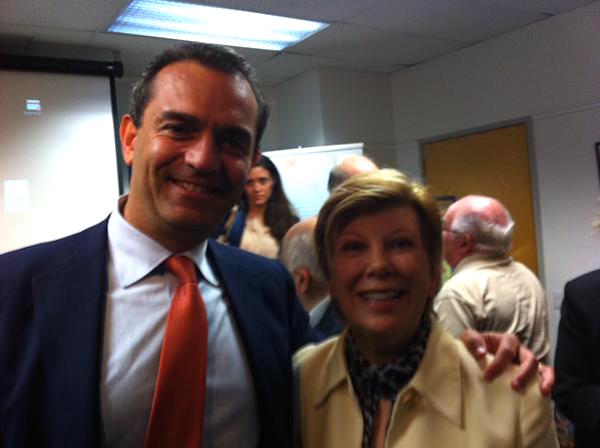 Meanwhile, back in Napoli Town, the big news was the long awaited (partial) openings of the Municipio metro station, which has made the trip to Stazione Centrale a hop, skip and a jump and given tourists another route by which to travel between the station and the port, and Piazza Muicipio. The line of sight from the Mayor’s office inside Palazzo San Giacomo to the port and vice a versa is not yet unimpeded, but the piazza is really coming along and you can finally see the vision its designers have had in mind all along. As I took my first walk past the Fountain of Neptune (now in its 3rd, 4th, 5th home???) which had been behind the cover of fences for months, I was reminded how much this city has changed in ten years and I felt a wave of both nostalgia and hope for the future wash over me in equal measure. 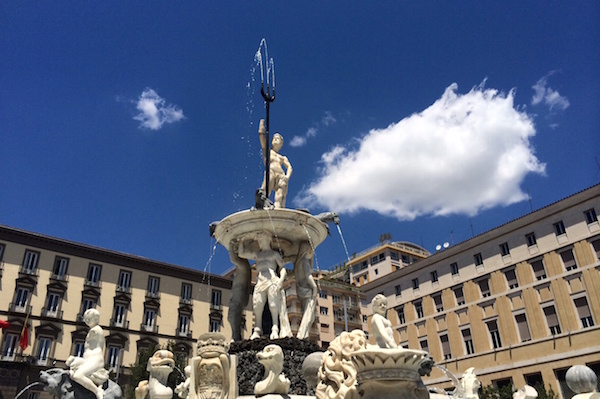 The Naples of ten years ago, the place I ran to desirous to lose myself in a foreign culture, felt like an oasis then. A bit isolated and standoffish, a bit stuck in the past and far off the radar of most tourists. It suited me perfectly. Ten years on, however, I find myself coming to a crossroads again. The city it would seem is on the same trajectory and the Mayor’s visit to NYC this year and to San Francisco in 2013 are just two examples of the changes that are underfoot.

Two months of intense organizational efforts from i-Italy between Naples and New York, a great collaboration with the Consulate General and the other institutions of Sistema Italia, enthusiastic and generous support from all sectors of the community. These ingredients made for the success of the mayor of Naples Luigi de Magistris’ trip to New York. Street encounters in the Little Italies of Manhattan and the Bronx, conferences in the two major university institutes, meetings with entrepreneurs and tourism agencies – and a great human connection with mayor Bill De Blasio. At the center of it all, an atypical and unexpected Naples, the emblem of an inclusive city, which volunteers alongside New York to jumpstart an international movement towards the globalization of the rights to citizenship – a globalization of humans, not just of capital and merchandize. The Mayor “Of the Streets”, Between Past and Present, i-Italy, 12 June 2015

While the city’s feet remain firmly planted in the past with respect to its culture and traditions, its initiatives are now firmly aimed towards the future. And Naples doesn’t just desire to propel itself into the 21st century, it wants to lead the charge, especially with regards to environmental, human rights and economic development programs.

Naples on the Blogs

July in Naples. What more need to be said. It will be hot, hazy and humid and the only place one should be is at, in or near the water. The Naples coastline boasts a variety of bathing establishments along the Posillipo coast and a handful of bathing beaches along Lungomare. Get the best of both worlds – Discover Naples Coastline By Boat. And of course there is the Sorrento Coast, the Amalfi Coast  and the Islands of  Capri, Ischia & Procida to explore.

There will be plenty of events going on throughout the summer – concerts, open air cinema, festivals – and Holly will be keeping us up to date on all of those.

For the Napoli Expat – the AIWC and the Naples International Happy Hour are on hiatus until September but the weekly English language services at Christ Church Naples will continue every Sunday throughout the summer. There is also Cinema in Original Language at the Cinema Academy Astra (presented by  CLA – Centro Linguistico di Ateneo) and at Multicinema Modernissimo. Find all of Naples English Speaking events.

And in other news… we will be taking the NU Guide to Naples to London this month for a special evening devoted to Naples at the Italian Cultural Institute, London. Bonnie and Penny will join Jordan Lancaster, author of In the Shadow of Vesuvius for a  panel discussion about Naples, “a conversation that will focus on the story of the authors’ “love affair” with this exceptionally rich and varied city and their ambition to share its beauty and unique appeal.” The panel will be chaired by Carol King. The event will be on July 23rd starting at 6:30 pm. Seating is limited and reservations are required.

Happy 4th of July to our American Friends and hope you have a fun-filled and sun-drenched July!!!