Executed by hanging on August 20, 1799 – her crime was writing pamphlets that denounced the Bourbon Queen Maria Carolina for lesbianism – Eleonora Fonseca Pimentel calmly stepped up to the gallows and quoted Virgil: “Perhaps one day this will be worth remembering.” 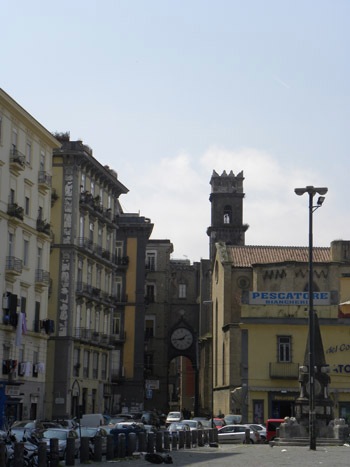 Eleonora was born in Rome. Her father was Portuguese and moved the family to Naples when Eleonora was nine years old. There, she learned Greek and Latin and by the age of sixteen she published a nuptial hymn written for the marriage of King Ferdinand and Queen Maria Carolina, celebrating the accomplishments of the Bourbon dynasty. Her success catapulted her into the intellectual circles of Naples, where she wrote sonnets, cantatas, and oratorios.

She married the Marquis Fonseca, but the union was a disaster. The Marquis had no compassion for her upon the death of their infant son and he beat her so badly that she miscarried two other children. According to court documents, he also forced her to sleep in the same bed with him and his mistress. They separated and thereafter Eleonora thrust herself into the ideals of the French Revolution, becoming a Jacobin.

The Jacobins fought against royalist forces in the city in 1799 and won. They proclaimed the Parthenopean Republic at the Charterhouse of Saint Martin (Certosa di San Martino) and created a government modeled along French lines, citing liberty and equality for all. The republic, however, survived a mere five months.

Eleonora fought for Jacobin ideals through her writings. She translated books and articles into the Neapolitan dialect, hoping to incite the staunchly pro-monarchist lazzaroni to overthrow the King. To that end, she also wrote for more than thirty issues of the newspaper Monitore Napoletano, the mouthpiece of the Parthenopean Republic. But the Republic had many problems and the Bourbon monarchy soon wrested back control of the city. Eleonora was one of many Jacobins who were executed at that time.

Getting There: You’ll see the plaque dedicated to the Parthenopean Republic along the wall while walking down the street from Castel Sant’Elmo to the Certosa di San Martino. A second plaque dedicated specifically to Eleonora can be found across the street from the Santa Chiara Cloister. Finally, Execution Square (today named Piazza Mercato) is a few blocks from the port as well as Piazza Garibaldi.

For history buffs who’d like to look up more, the other notables executed in Piazza Mercato, include King Corradino (1268) and the popular revolutionary Masaniello (1647).