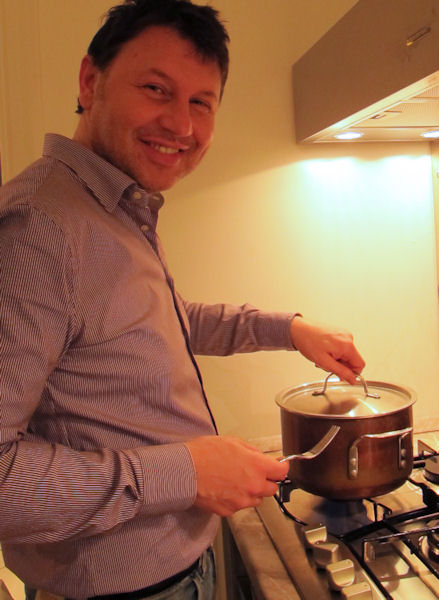 Genovese – a rich onion sauce flavored with meat, it is a classic Neapolitan dish. Think the aromas, flavors and comfort of the Sunday Pot Roast but with a Neapolitan flair.

Cooked ever so slowly over the lowest of flames, the onions gradually transform from crispy bites into a creamy sauce that is as savory as it is sweet. The meat so tender it has to be removed from the sauce with a surgeon’s precision lest it fall apart into a thousand pieces.

Served with paccheri – large tubes of pasta that are a Neapolitan tradition and the perfect vessel to deliver the sauce.

As with all Neapolitan dishes there are as many versions and cooking methods as there are Neapolitans. Onions are always the star of the show however and I find large white onions are the best. As for the meat, the dish can be made with beef, veal, pork or a combination. Spalla, which roughly equates to chuck roast is often used but chuck steak, pork shoulder or pork or veal shank – stinco di maiale or stinco di vitello can be used as well.

Serve as one dish or two. Use the sauce to condition the pasta and serve it as the primo piatto. Serve the meat with a dollop of sauce on top as the secondo piatto. Or, serve them together as one dish. 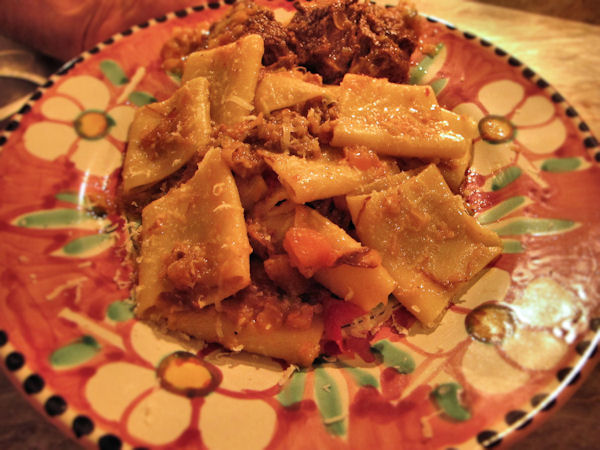 I recently learned how to make Paccheri alla Genovese at Gambero Rosso’s cooking class Pizzaioloa, Aglio e Olio e Genovese at Città del Gusto. A delicious recipe but a bit fussy, I found the addition of milk and pecorino cheese to make the dish a little too rich for my tastes.

Having tried Gambero Rosso’s recipe and having sampled Genovese in more restaurants than I’d care to admit, I wanted to know how the home cook makes it. So I asked my dear friend Giuseppe from Noi, hairstylist extraordinaire and passionate home cook to come up and show me how it’s done in the Neapolitan kitchen. About a half hour later I had a simmering pot of Genovese on the stove and Giuseppe’s family recipe recorded for posterity. 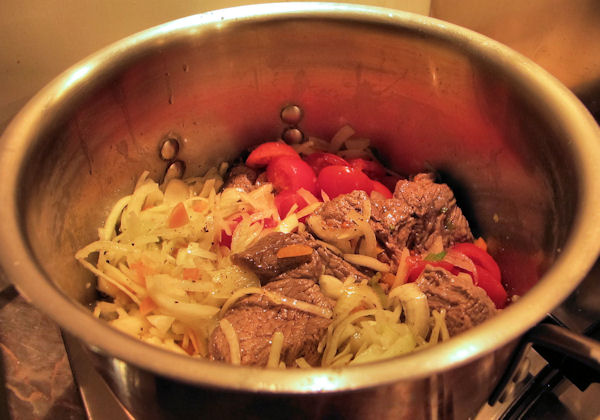 Heat oil and lard in a 6 – 8 qt stock pot over low heat
While the oil is heating, finely dice the carrots and celery and set aside
Finely chop the onions and set aside
Quarter the tomatoes and set aside
Saute the carrots and celery
Add the meat and 1/2 glass of white wine
Once the meat is lightly browned, remove it and set it aside
Add the onions, tomatoes, salt, and pepper
Swirl in a bit more olive oil
Return the meat to the pan and add a 1/2 glass of water
Cover and cook 3 – 5 hours until the sauce is amber-colored and the meat is tender

Cook the paccheri al dente
Remove the large chunks of meat from the sauce and set aside to serve with the pasta or as a secondo piatto
Return the paccheri to the pot the pasta was cooked in
Over low heat, add the sauce with a ladle a bit at a time until the paccheri is well coated (reserve some to put over the meat)
Stir in grated parmigiano cheese to taste
Plate the pasta and if you like add a few chunks of the meat and sprinkle it with a bit more parmigiano