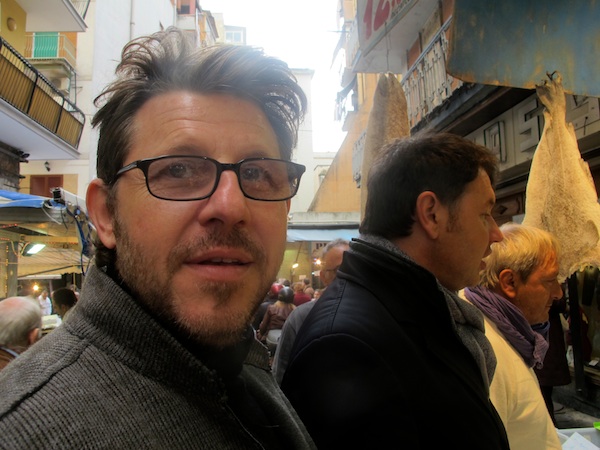 The Neapolitan Christmas Eve dinner, Cena della Vigilia di Natale is serious business. It calls for a lot of love, a bit of patience and nerves of steel. And in this case, the hands of not one, but two Topo brothers. Giuseppe and his big bro Massimo.

An hours long celebration it features fresh seafood, fruits and vegetables and of course Neapolitan sweets. The star of the Neapolitan Christmas table, il capitone, eel, a tradition that dates to at least the 17th century. Why is capitone tradition? Chissà perchè, who knows why. Ask a Neapolitan why they eat capitone on Christmas Eve, and believe me I’ve asked a few, the answer is always the same. Perchè? Perchè. Because it’s tradition.

I doubt it has anything to do with the Roman equestrian Publius Vedio Pollio (died c. 15 BC), although that would make for a great story. A one time friend of the Roman Emperor Augustus, Pollio raised eels at his villa in Posillipo. I’d like to paint you a rosy story of a beautiful villa overlooking the bay on Posillipo Hill. Elaborate gatherings with wine of the gods, fish from the sea.

I suppose that was all there but the legend it seems is more grim. A cruel man even by Roman standards, it seems Pollio punished his slaves by throwing them to the eels. That is what they, or at least Pollio believed made them the best eels in the region.

Perhaps the tradition stems from the eel’s resemblance to the serpent, the symbol of the devil. Eating capitone it was believed would ward off evil and ensure good fortune in the New Year. Considering the superstitious nature of the Napoletani, this seems a more likely explanation, but chissà perchè.

Eel is simply a traditional plate of the Christmas season. And not just eating them or cooking them, but buying and shall we say, prepping them. The best eels as you can imagine are capitoni veraci, live eels. In fact, tradition says they should be live. And the best place to get them is Naples biggest and best fish market, Porta Nolana. It’s a little early in the season yet, but in the days leading up to Christmas, Porta Nolana will be open until the wee hours of the morning, its characteristic tubs overflowing with the Christmas capitoni. Just keep your eyes out for the ones that escape and slither away down the alley.

Luckily ours didn’t. Of course I’m thinking, okay – what now? You are not seriously bringing these creatures back to my apartment? While I’m sure there are a lot of people who still kill and clean the eels themselves, the problem is easily solved. Mi offri un caffè. For the price of a caffè (about 80 centesimi), expert hands (and a really big knife) will make short work of this wriggly delicacy. If you are really interested in how it’s done or would like to try it yourself, check this video out. But I must warn you, don’t click this link if you are squeamish. 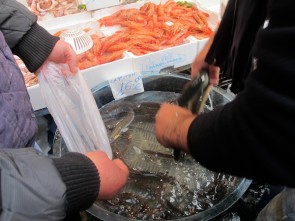 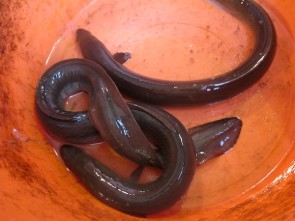 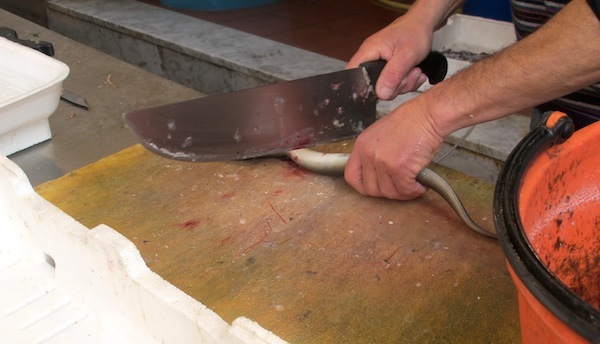 With the hard part out-of-the-way, preparing the capitoni is quite quick and easy. Of course there is more than one way to skin an eel. It can be stewed, steamed, al forno (in the oven), or fried as Giuseppe makes it. While I’ve yet to acquire the taste for it in any form, chissà, anything is possible. 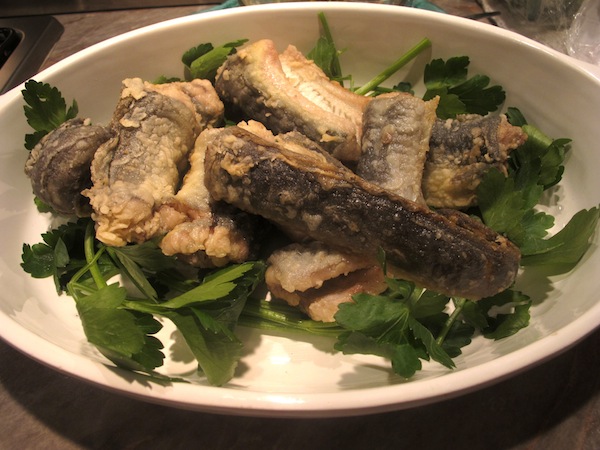 Rinse the eel well
Cut into serving sizes and if you want, remove the part with the eyes
Coat in flour
Heat oil in large frying pan with enough oil to cover at least half of the eel
Shake off the excess flour and put the eel into the oil
Cook the eel until it is golden brown on all sides, about 10 minutes
Drain on paper towels
Salt and pepper to taste 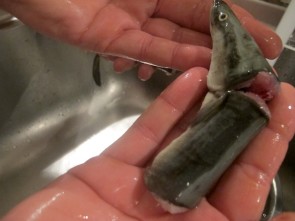 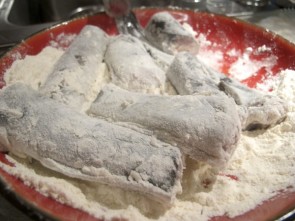 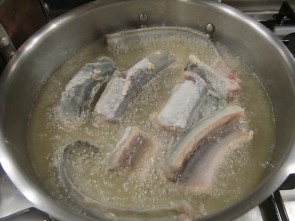 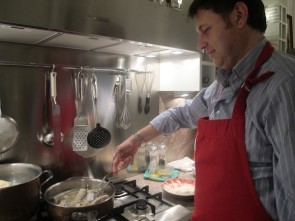 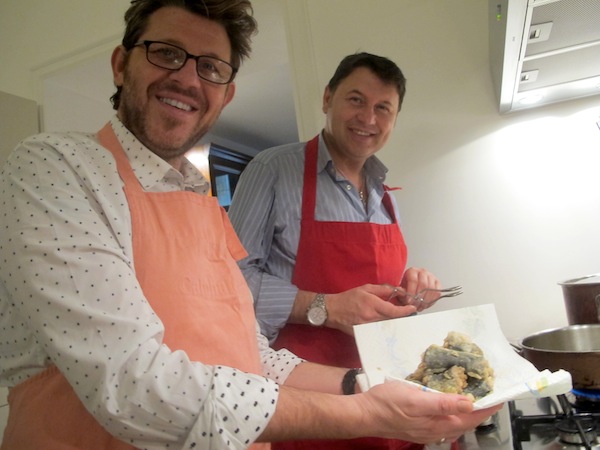 More about Christmas in Naples