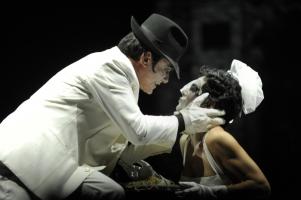 I went to see L’Opera da Tre Soldi, the Three Penny Opera at the San Carlo Theater the other night. A social commentary set in Victorian London, it was written by the German dramatist Bertolt Brecht and composer Kurt Weill, opening in Berlin in 1928. Since then it has been performed more than 10,000 times throughout the world.

Starring Massimo Ranieri with special guest Lina Sastri, this production played at the Real Albergo dei Poveri for the Napoli Teatro Festival in July 2011. More musical theater than opera really, I found the music powerful and intense but the subject matter was too heavy for this opera novice. If I’m being honest, I didn’t really care for it and I didn’t see how this version got billed “a tribute to Naples and the Neapolitans.”

But that’s not the point I’m trying to make really.

Some years back, a dear Neapolitan friend of mine told me she’d never been to the San Carlo. I remember wondering how one could live in a city with such a rich musical and theatrical heritage, a city that is home to one of the most beautiful theaters in the world and not take advantage of it. Without realizing why, I selected a musical performance I thought she’d like, bought two tickets and gave them to her for Christmas. Outwardly she seemed touched but I saw a foreboding look in her eyes. The day of the performance she backed out.

I was, to coin a British term, gobsmacked.

This wasn’t a reflection on her however, but rather a reflection on the society in which she was raised. The haves and have nots. The bourgeoisie and the working class. And lest it be a business transaction, never shall the twain meet. Least of all at a high society venue like the San Carlo.

Interestingly, there’s a bit of a strange parity here with the theme of L’Opera da Tre Soldi.

It took me a long time to understand this but as I came to know this aspect of the city I also started to see it change. The truth is that at today’s San Carlo, minks mix perfectly well with blue jeans and the price of tickets, depending on the show of course, makes the San Carlo fairly accessible to the general public. Our 9th row floor seats went for €77,00 each, but seats at the tippy top of the theater were as low as €25,00. Follow the San Carlo on Facebook and if the show doesn’t sell out, you’re likely to get floor seats for €30,00 or €40,00.

But there is still a mindset that has yet to be overcome. Hopefully, productions like L’Opera da Tre Soldi featuring beloved Neapolitans better known for Canzone Napoletana than opera will draw in a broader audience. Of course they also have to entice people to come back, but that’s a discussion for another day.

The San Carlo’s latest initiative, Aria Nuova, the season of programming for the recently restored Teatrino di Corte di Palazzo Reale, the Court Theater of Palazzo Reale aims to chip away at this cultural divide. After 10 years of restorations, the 18th century Court Theater that was nearly completely destroyed by air raids during WWII has been restored to its former glory and returned to the city. Along with a cosmetic and structural face lift, it has been equipped with all of the modern amenities and technologies and a season of programming that intends to make Naples operatic and theatrical tradition more accessible, especially to the youth of the city. In fact, six of San Carlo’s eleven school productions will be performed in the Court Theater.

The Aria Nuova initiative will also return another treasure to the city, Opera Buffa, the Neapolitan Comic Opera that came into its own in the mid 1700s. One of Naples greatest artistic legacies, it is better known throughout the world than in its birthplace of Napoli, a phenomenon the San Carlo hopes to do something about. For its debut season at the Court Theater, the San Carlo has planned three Opera Buffa performances: Domenico Cimarosa’s Il Marito Disperato which ran in December 2011, Niccolò Jommelli’s Don Trastullo in March 2012 and Domenico Cimarosa’s Il Maestro di Cappella and Domenico Sarro’s La Furba e Lo Sciocco in May 2012.

Aria Nuova joins a number of other cultural programs in a spirit of inclusion that seems to be the new mantra of the city. Programs like Maggio dei Monumenti, Estate a Napoli and Natale ha Napoli that are part of Comune di Napoli’s broader vision of making the city’s cultural heritage more accessible to the general public. At the January 12th press conference introducing the Aria Nuova initiative, Naples Mayor Luigi di Magistris said:

The philosophy we all share is that the beautiful places of the city should be open, open as along as possible, the morning, the afternoon, the evening, open to all. The beauty must be available to everyone, because it is through the beauty that world is changed. Naples is very beautiful, it is rich in culture and through the theater, the performance, the music we can portray the best Naples.

Only by making culture open, accessible and approachable to everyone, especially the youth, will the city be able to bridge the cultural divide. There is still a steep hill to climb but if initiatives like these continue, the future looks very bright.